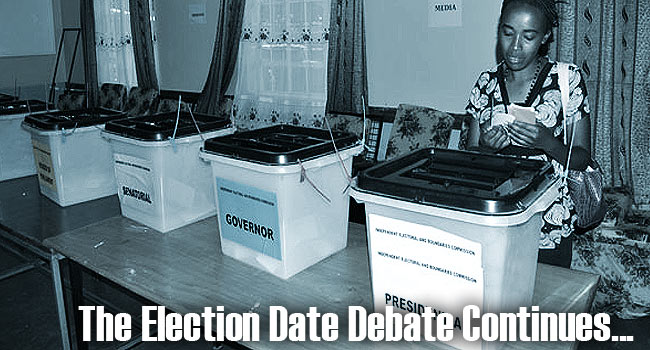 Kenyans are yet to know when exactly the country will hold its next elections. Regardless, several events have occurred that are bringing us closer to knowing the all-important date. The following is an explanation of what has been happening and where we stand on this issue.

Following the heated debate on when elections should be held, the High Court made a ruling based on the authority given to them by the Constitution in Article 165 (3) (d), that says that, they have jurisdiction to hear any question respecting the interpretation of the Constitution including the determination of:

Following the High Court ruling, there is a question on whether there will be a political vacuum in case the election is to be held in March 2013, considering the fact that President Mwai Kibaki's term ends on December 31. According to Article 142(1), the President shall hold office for a term beginning on the date on which the President was sworn in, and ending when the person next elected President is sworn in. This in turn means that the President will remain in office until when the newly elected President is sworn in. If on the other hand President Mwai Kibaki resigns from office before the election date, according to article 146 (2)

This therefore means there is no possibility of a power vacuum occurring.

To add to the election date debate, the Cabinet recently presented a bill in parliament that was seeking to change elections date from the 2nd Tuesday of August to the 3rd Monday of December after every five years. It is still valid and in the event that it is passed, it will not affect the Court ruling made on the elections date that was in accordance with the 6th Schedule of the Constitution of Kenya. This means that the elections will still be held in March 2013 in case the coalition government is not dissolved. However if the bill is passed, it will mean that every other election following the next elections will be held in the month of December after every 5 years. However, if the bill fails to pass, then the month of August will be the official month of elections. It should also be clear that fact that the (2012) elections might be held in March 2013 does not mean that March will now be the official election month. The March 2013 date is a decision was based on when the term of the current Parliament will end.

Wednesday, 10 October 2012
The President has declined to sign in the controversial Finance 2012 bill. He termed it as unconstitutional and unaffordable. What President Kibaki... Read More...
Conflict In Northern Kenya

Wednesday, 11 January 2012
The Northern part of Kenya has been experiencing very tough situations in the recent past. As it is trying to recover from a very severe drought,... Read More...
We Can Have A Bright Future

Friday, 19 October 2012
By Mwana Falsafa A recent report by Forbes magazine revealed that the richest man who ever lived, was an ancient African King. Mansa Musa I of Mali... Read More...
Kenyans for Kenya

Wednesday, 03 August 2011
By PhoebeDisappointment... this is a word whose meaning Kenyans have in the recent past had to unwillingly bear every single day of their lives.... Read More...