When devolution is not done well/Poor county governance leads to

The challenges and how the current Laws/Bills attempt to address them.

Devolution entails the transfer of political, administrative and legal authority, power and responsibility from the centralized government unit to some unit at local or regional level. Such a transfer is legal if provided for under the constitution. It is a practice in which the authority to make decisions in certain spheres of public policy is delegated by law to sub-national level. In a devolved system, the units of devolution to which power and authority is devolved or transferred are autonomous from each other, though interdependent functionally.

While devolution is universally desirable and institutionalizes citizen participation in development, planning and management, devolution may have negative implications if implemented in the incorrect manner and with wrong motives. It is worth noting that problems faced in the previous regimes were attributed to the majimbo system of government. This created friction between KADU and KADU.I f a devolution government cannot work, the constitution endorsing this is rendered paralyzed / unenforceable.

While the task force labored to dispense a system that was viable, various errors sufficed. It is generally observed that the Committee of Experts failed to give due regard to matters relating to the sizes of the boundaries which left some counties marginalized. The matter has promoted contention amongst citizens who play an active role in safeguarding their interests. In addition, the task force left a number of the old systems intact such as the local authorities.

The task force conceptualized our devolved government as a unique system of government, neither federal as that of the United States of America nor Unitary. Article 6(2) of the Constitution provides that the national and county levels of governance are distinct and interdependent and shall conduct their mutual relations on the basis of consultation and cooperation.

The task force wanted to override the contention 'who will control what?' and in doing this, they steered away from looking at available resources as strictly county or national but communal. Following this, the bills/laws related refer to resources as 'communal' or 'community'. Some of the shared resources include universities and institutions such The Kenya Institute of Administrators.

The following Bills are crucial for the realization of devolution in our government:

Some questions raised frequently include:

Which body is mandated to draft the bills?

The committee of experts was not established by the old constitution. The task force works independently and so does the Treasury. However the two can work together and consult. The parliament commences with approving such and the Ministry of Justice, through the office of the Chief Justice documents the bills.

Are Kenyans ready for devolution?

The public as well as aspiring governors and other officials ought to be actively engaged in obtaining information pertaining to this matter. The responsibilities that come with devolution should also be taught. It is important for Kenyans to be educated about devolution before implementing it in order to achieve a competent government whose leaders are accountable to their subjects.

Will devolution separate/ cause division among Kenyans?

Devolution is expected to give Kenyans an opportunity to interrogate/question the amount of resources that we have as a nation, who controls them and how they will be distributed. However, with the availability of resources, the various counties will have to interact and co-exist for their sustainability. For example through agriculture, trade etc.

In a devolved system, the units of devolution to which power and authority is devolved or transferred are autonomous from each other, though interdependent functionally

The Vetting of Judges

Tuesday, 06 March 2012
"Vetting", that's a word Kenyans have gotten used to over the past year. Vetting of commissioners, Supreme Court judges, attorney general...... Read More...
The Maputo Protocol in line with the New Constitution

Thursday, 08 December 2011
The title of the protocol is Protocol to the African Charter on Human and Peoples' Rights on the Rights of Women in Africa, the name Maputo came... Read More...
The Abuja Declaration

Thursday, 03 June 2010
Kenya in East Africa, also falls in to this category, under a Christian leadership its nearly 40% Muslim population, mainly living in the... Read More...
Legal Provisions on the Office of the Inspector General

Tuesday, 16 December 2014
The office of the Inspector-General is established under Article 245 of the Constitution and Section 8 of the National Police Service Act, No. 11A of... Read More...

Potential Constitutional Crisis Due To a…

Article 27 of the Constitution of Kenya 2010 recognizes that every person is equal before the law and has the right to equal protection and equal benefit of the law.... 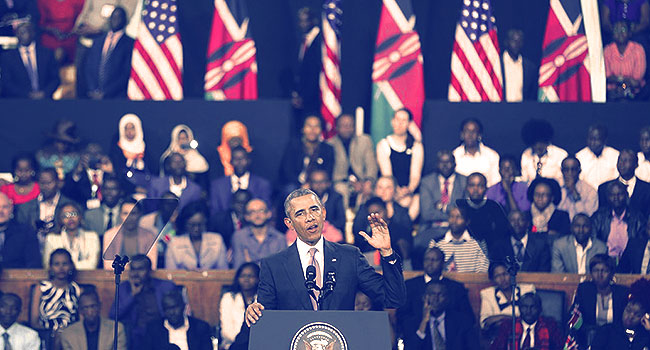 The President of the United States Barrack Obama was in Kenya recently for an Official Visit and to open the 6th Global Entrepreneurship Summit (GES), which was being held in...