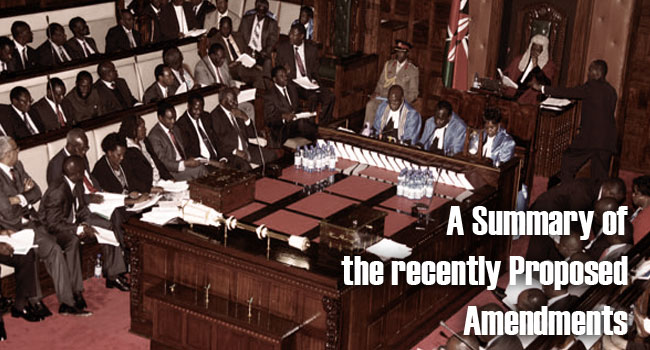 In the wake of the ongoing amendments that have evoked mixed reactions from Kenyans, it is a noble consideration to uphold the spirit of the Constitution which establishes certain strict checks and balances and enshrines public participation in the legislative process.

The Parliament passed the Statute Law (Miscellaneous Amendments) Bill, 2012 published in Kenya Gazette Supplement No. 34 (Bills No. 17). This Act of Parliament purports to make minor amendments to statute law, as and when necessary for the proper functioning of various creatures of statute.

AMENDMENTS TO THE ELECTIONS ACT, 2011

AMENDMENT TO THE POLITICAL PARTIES ACT, 2011

Wednesday, 27 June 2012
By Ken MbaabuTanzania is going through one of the most important phases in the history of any modern day democracy. This is especially important... Read More...
The Abuja Declaration

Thursday, 03 June 2010
Kenya in East Africa, also falls in to this category, under a Christian leadership its nearly 40% Muslim population, mainly living in the... Read More...
Accessibility Rights for Persons With Disabilities

Friday, 29 June 2012
By Maureen Kanyingi Women and men with disabilities can and want to be productive members of society. Promoting a more inclusive society and... Read More...
The Vetting of Judges