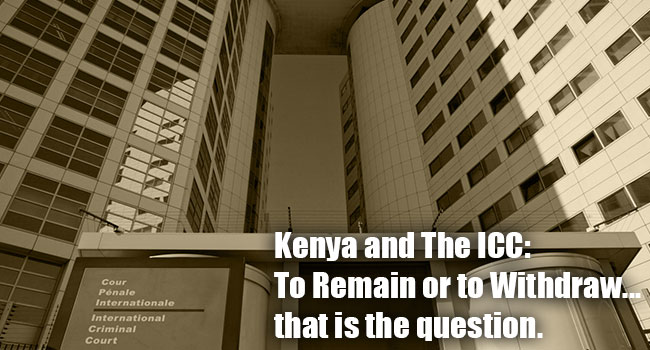 Kenya and the ICC: To Remain or to Withdraw, that is the Question.

The last two weeks have been very eventful in the Kenyan experience. Today, the 10th of September 2013, our Deputy President William Ruto stands trial for crimes against humanity allegations stemming from the 2007 - 2008 post election violence. As we counted down to the trial in the last 14 days, the Kenyan national assembly voted to begin the process of withdrawal of Kenya from the Rome Statute, thereby effectively refusing to subject our citizens in future to the ICC process.

Initially, there had been an earlier push for such a withdrawal when the trials commenced two years ago. When it became clear that the cases would proceed whether or not Kenya withdrew from the Rome statute, the clamour died down. What is different this time round, is that William Ruto is now Kenya's deputy president. His co-accused Uhuru Kenyatta, is now Commander in Chief of the armed forces of Kenya. They are now no longer any two accused persons, they are a constitutionally recognised symbol of national unity. Indeed our national pledge calls for Kenyans to pledge their loyalty to the flag and the office of the president in one breath. They therefore feel emboldened to lead the country and to resist external pressure. They have promised to co-operate with the court, but on the sidelines, they are flexing their muscle to remind the ICC that they too have options available to them to assist their cause.

Secondly, the trial initially started with six Kenyans on trial. Three of them have since been acquitted, basically due to sufficient evidence to proceed. There is the matter of the witnesses who keep pulling out intermittently, though there are many who still hang on and fully intend to testify. Many citizens who originally supported the ICC process are now not too convinced of the case against the President, his deputy and Joshua Sang. Furthermore, the ICC received 20 names and chose to prosecute only six. Questions of who the other 14 are also rife, since it is speculated that former president Kibaki and former prime minister Raila Odinga should also be in the Hague facing trial.

Thirdly, the whole process has been highly politicised. During the recent March 2013 elections, it was made to become an "Us vs Them" contest. The allegation was basically that the then prime minister Raila Odinga orchestrated the ICC process as a tool to eliminate Uhuru and Ruto from the race to ensure his own quest for statehouse succeeded. This argument found resonance with many from the Kikuyu and Kalenjin tribes where the president and his deputy belong, and the now infamous "tyranny of numbers" was born. These are two very large tribes, and they managed to come together to ensure victory for their candidates. The tyranny of numbers therefore was that according to the statistics, of the registered voters belonging to the two tribes combined against all the other kenyan tribes was large enough that there was a clear margin of victory. Therefore all they needed to win the election, according to pundits, was to work together and consolidate this block. They did this, and they actually won the election in the first round.

This leads directly to my fourth point, that the sheer majority in the houses of parliament as well as many county assemblies means that any vote for or against any motion, usually goes the government way. They have the numbers to force any motion through, regardless of what the opposition says. During the vote to leave the ICC, opposition members walked out, since they saw the futility of their objection. It would have been better for them to have stayed and be counted against the motion, but they chose to debate, then walk out.

This background is to set the stage for where we are right now. From now until the end of Ruto's and Sang's trial at the Hague, plenty of information will become public domain. Witnesses will reveal that which we were not previously privy to. Their credibility will be tested and shaken. Old wounds will be reopened, and the nation will collectively shudder when some scenes are recollected. To the victims of the post election violence, this will be a decisive moment, when they will either get justice, or will finally resign themselves to the fact that is it over for them. If the ICC process pushes through, the chances of a local process are nil.

There are many who feel, that the ICC process has overshadowed the need to try local perpetrators. The man who actually chased his neighbour through the maize fields with a machete. Somehow, the ICC process stalled investigations into the post election violence, and many remain in the communities where they caused untold mayhem. This means that even for the victims for whom this is being done, the process may not yield justice. Many lost their land, and the perpetrators even became squatters on the land. Many remain uncompensated for loss of loved ones and property worth millions. There also remain very strong undercurrents of hatred and suspicion, even if those two tribes that fought in 2007/2008 are now governing the nation together.

The ICC process in Kenya was the genius of Judge Waki's commission investigating the post election violence. His options were simple, kenya had one year to try the perpetrators of the post election violence, or at least start a local tribunal to try those who planned it all. Failure to which, there was a famous white envelope, which contained 20 names of those perceived to be most culpable for the violence. Of the 20 names, the then prosecutor Ocampo picked six names to commence trial. That process in itself was politicised, since many saw that the ones sent to the Hague went on behalf of the real protagonists of the day, PNUs Mwai Kibaki was on trial via Francis Muthaura, Hussein Ali and Uhuru Kenyatta, while Raila Odinga was on trial via William Ruto, Henry Koskei and Joshua Sang. The argument was that the peace was so fragile that to try the head of state and the prime minister would dis-stabilise the country. Fast forward to 2013, and those who allegedly took the place of those in power then are themselves now in power. The current prosecutor Fatou Bensouda decided to forge ahead regardless. While many were ready to sacrifice them three years ago, now that they are in charge of the country, many are ready to defend them as a sign of defending our sovereignty as a State.

The factors above and many more minor factors make the case for Kenya to be at this crossroad. The ICC trial chamber also released the timetable for teh hearings and it became clear that at some point in November both the president and his deputy were going to be in the Hague busy with the hearings. Whilst it is not mandatory for both to be present for the Nation to operate, speculation was rife that this was an attempt to have both of them at the Hague to detain them until the end of the trial. This would leave a leadership vacuum that could become the basis of a fresh clamour for power. The ICC has since capitulated and has started the process of revising this to ensure that only either one is at the Hague at a time.

Looking at it from a wider perspective, Kenya's withdrawal from the ICC is a well calculated move. It may seem like a local process, but many suspect that the shuttle diplomacy done by the deputy president across many african states was actually setting the stage for this very moment. The argument is simple. So far, majority of the people who find themselves at the Hague seem to be from the continent, and yet major world powers have refused to subject themselves to the Rome statute, and so seem to get away with rape, murder and manslaughter. The argument is therefore, Kenya has a reason to do it, so let Kenya start the pull out. Others can join as a show of solidarity, but in actual effect, it is similar to playing the get out of jail free card in a monopoly game. They (the african nations) will remove the future possibility of being in Kenya's predicament. The rationale is simple, Africa is the new frontier emerging in trade, industry, economics and therefore, time has come for Africa to stand and defend herself without being beholden to other external powers.

This domino effect withdrawal, is meant not only to get future African leaders the assurance that the Hague is no longer a threat, it will also serve to weaken the status of the Court. This is because, Kenya is now looking East for her future relationships. The difficulty of the West to work with an ICC indictee means that the donors being courted are now in Asia. The Syrian regime has been able to stand this long because of support from China and Russia who would veto any attempt by the Security Council of the United Nations to intervene militarily in Syria. Africa is therefore very aware that it is important to have friends in the West, but the friends of the East stick better during trying times. This has become incentive to become daring enough to risk the fall out of withdrawal from the Rome statute with the West with the promise of stronger relationships in the East.

The next three months are crucial for Kenya not only for the victims of the violence, but also in view of the fact that her choices now could well set the pace for the rest of Africa and how we deal with those perceived to have impunity and a general disregard for their citizens' rights in their quest for power.

Thursday, 19 January 2012
23rd January has become an important date on the calendar for many Kenyans because the International Criminal Court (ICC) is expected to seal the... Read More...
The AU, ICC and Kenya

Sunday, 03 November 2013
The African Union (AU), formerly the Organization of African Union (OAU) was formed on the 9th September 1999 when the Heads of State and Government... Read More...
ICC's Fatou Bensouda

Thursday, 08 December 2011
Fatou Bensouda, a Gambian lawyer aged 50, is to take over from Luis Moreno-Ocampo, as the International Criminal Court (ICC) Prosecutor from April... Read More...