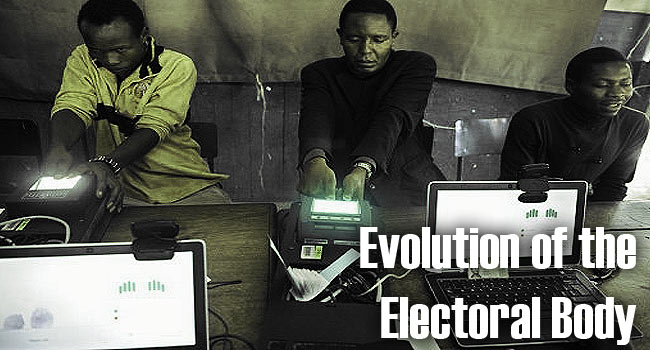 The old constitution provided for the ECK consisting of a chairman and a maximum of 21 members appointed by the president. Its core duties were defined by the constitution as:

The Electoral Commission of Kenya had been bestowed with the main function of supervising and overseeing the whole electoral process to ensure it was effective and efficient.

Samuel Kivuitu was the Chairman of the Commission at the time of its disbandment. He was reappointed to his post by the Kenyan President Mwai Kibaki ahead of the 2007 general election, having already been in charge during Kenya's general elections in 1997, 2002 as well as a constitutional referendum in 2005. Mr. Kivuitu had initially been appointed to the post by former president Daniel Arap Moi, replacing Mr. Zacchaeus Chesoni, who was the head of the Electoral commission during Kenya's 1992 general election.

Civil unrest in the aftermath of Kenya's 2007 presidential elections and the election anomalies reported as a result prompted the government of Kenya to completely overhaul its system of managing elections.

The Interim Independent Electoral Commission (IIEC) was formed to replace the Electoral Commission of Kenya and was charged with the mission to institutionalize sustainable electoral processes that would guarantee free and fair elections. The team had nine commissioners. The chairman and commissioners were nominated through a competitive process by Parliament appointed by the President in consultation with the Prime Minister and sworn in on May 11, 2009.

The body was mandated to:

The IIEC had 12 months from December 24, 2009 to December 2010 to discharge its mandate. Alternatively, it would cease to exist three months after a new constitution was effected. In that case, the new constitution would provide for a permanent successor electoral body, which would take up the role of reforms.

Under the dispensation of the new constitution, there is a provision for the establishment of the Independent Electoral and Boundaries Commission (IEBC) whose responsibilities include:

The boundaries for all the electoral areas are to be drawn by an Independent Electoral and Boundaries Commission (IEBC).

The short listing of candidates for commissioners to the Independent Electoral and Boundary Commission (IEBC) kicked off where the selection panel forwarded three names for the chairperson's job, and thirteen names for commissioners to President Mwai Kibaki and Prime Minister Raila Odinga.The names are to be presented to parliament for approval. The IEBC is said to be unveiled soon as it is expected to conduct its first election in November during the Kitutu Masaba by-election scheduled for the November 28.

Wednesday, 10 October 2012
The President has declined to sign in the controversial Finance 2012 bill. He termed it as unconstitutional and unaffordable. What President Kibaki... Read More...
Mind of a Politician

Wednesday, 13 July 2011
By Phoebe The minds of politicians (Kenya's) have always been the hardest things to fathom due to the rate at which they are changed. Some claim that... Read More...
The County Governments

Thursday, 13 December 2012
As Kenyans prepare for the coming General Elections, it is important to understand the roles of the people they will be voting for. The Constitution... Read More...
Politics and Bad Marriages

Tuesday, 27 November 2012
By Mwana Falsafa Politics and Bad Marriages: Why You Need To Vote Wisely. If you have lived long enough, you most likely have seen it. A lovely... Read More...