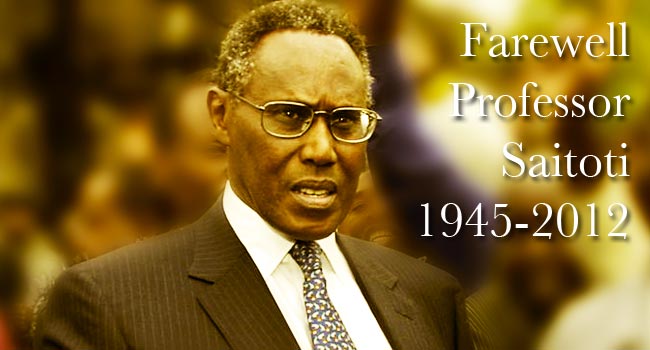 On Sunday 10 June, 2012 at around 9:00 a.m. Kenya came to terms with the sad and shocking news that it had lost the Internal Security Minister George Saitoti and his deputy, Orwa Ojode and four others when a Eurocopter AS350 helicopter belonging to the Kenya Police Air Wing registration 5Y-CDT, carrying them crashed in the Kibiku area of Ngong forest . Saitoti and Ojode were on their way to attend a religious ceremony in western Kenya when the Eurocopter came down in the Kibuku forest around 8:30 am (0530 GMT) shortly after taking off from Nairobi's Wilson airport. At the scene, what could be seen were bodies charred beyond recognition and scattered remains of the helicopter. President Mwai Kibaki and Prime Minister Raila Odinga paid tribute to Saitoti. Consequently the government declared three days of mourning for the crash victims.

Until now the cause of the accident is not clear and experts are conducting investigations that will attempt to uncover the cause. Kenyan police barricaded the scene of the crash and said that investigations were underway.

Before meeting his demise, he was at the forefront of Kenya's politics and ardently took part in various political processes that shaped our nation. For over a decade the Internal Security minister served as a deputy to former President Daniel arap Moi. He also served as minister for education. Saitoti announced last year that he would seek the Kenyan presidency in 2013.

During his political career, Saitoti faced allegations of being involved the Goldenberg scandal while serving as vice president and finance minister under Moi. He was later cleared when a constitutional court ruled that an inquiry that investigated the scandal had made wrong conclusions about Saitoti.

The war against terror

As internal security minister, his docket was in charge of the state's top investigative arms, the National Security Intelligence Service and the Criminal Investigations Department. Saitoti was the government's spokesman on security matters, a position that saw him endorse the deployment of Kenya's troops to Somalia to battle the Al-Shabaab forces. Saitoti made the first public announcement of the invasion. This saw the launch of Operation Linda Nchi. Often times, he was seen to re-assure Kenyans especially in the recent wake of terror attacks orchestrated by the Al-Shaabab. Saitoti spoke passionately of peace in the country and war against Al Shabaab.

Conversely Al-Shabab has hailed the death of Saitoti through the messages that it has been generating on Twitter expressing this as "the death of the evil minister," and reiterating that Saitoti was "Better off dead!". Another tweet read: "Saitoti played a prominent role in overseeing the abduction, torture and imprisonment of hundreds of innocent Muslims in his war against Islam."

So far, several people have been killed in a series of bomb attacks in border areas, and a bomb in a Nairobi shopping centre last month wounded 38 people. Saitoti declared recently that the government would not be cowed by "terrorists". The Internal Security ministry is thus at the center of the operation.

This is yet another blow to President Kibaki's regime as Saitoti was a closely allied to him. Earlier in the year, the government had lost John Michuki who was served as the Minister for Environment. In a statement Kibaki said the deaths were "a devastating loss to our country."

So in conclusion, there is a dire need for the key stakeholders in the government to harness their efforts in order to ensure that the good work that was began by our fallen veterans is brought to completion. This is especially in line with the on-going war against terror/the Al-Shaabab. Our country's security ought not to be compromised. Instead the issue needs to be confronted head-on without any intimidation on the role played by the government in this fight.