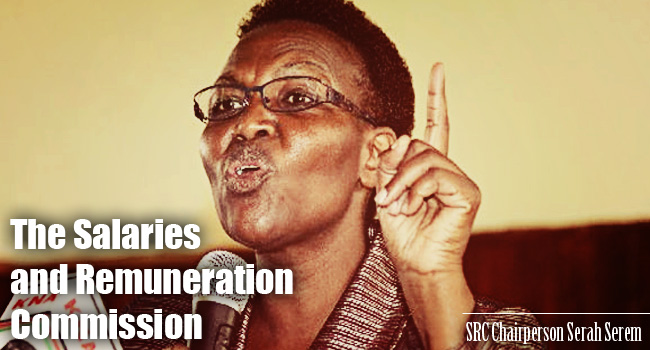 Article 230 of the new constitution provided for the establishment of a Salary and Remuneration Commission (SRC). The idea was to have a way to check the ballooning public sector wage bill. Of particular interest to the public has been the wages being paid to the Members of Parliament. The Kenyan legislators are among the highest paid in the world and are infamous for regularly increasing their salaries and allowances.

The SRC was subsequently formed through an Act of Parliament, the Salaries and Remuneration Commission Bill, 2011. After extensive research done in the US, UK, Canada, South Africa, Rwanda and Tanzania, the SRC proposed a pay structure that would see the pay of the President, MPs, Attorney General and other civil servants reduced, capped and taxed. This was done in an effort to reduce the wage bill to GDP ratio from its current 12% to the internationally recommended 7%.
The Finance Minister Njeru Githae pointed out in February that the Kenyan wage bill was the highest in the continent and that it had risen from 9% in 2011 to the current 12%. He warned of a large unsustainable fiscal deficit if the trend continued.
After the report was released, the public was allowed to weigh in their opinions, and many felt that the wage being paid to the MPs and the President was still too high and they would love it if the commission would further reduce it.

Despite all this, the 11th parliament MPs did not wait to be sworn in before agitating for an increase in their pay as the one proposed by the SRC was, according to them, unacceptable. They deemed the SRC actions to be unconstitutional because, according to them, the SRC has no mandate to reduce their salaries. So as the matter continues to play out, it is important you understand the function and powers of the SRC as envisaged by the new constitution.

Functions of the SRC

According to Article 230 of the Constitution, the SRC is mandated to

The Salaries and Remuneration Bill of 2011 further defines the duty of the SRC.

It says that in addition to the powers and functions provided under Article 230 of the constitution, the Commission shall

The Act further states that in addition to all these, the SRC is expected to be guided by the principle of equal remuneration to persons for work of equal value.

The SRC shall have all powers necessary for the execution of its functions given under the Constitution and the SRC Act 2011. These will include

It's important to note that the SRC is protected by the constitution. In Article 249(2), the commissioners are subject only to the constitution and the law. They are independent and are therefore not subject to direction or control by any person or authority. However, according to Article 252(2), a complaint to a commission or the holder of an independent office may be made by any person entitled to institute court proceedings under article 22(1) and (2). This is an enforcement of the Bill of Rights, which protects any person who feels that a right or a basic freedom (as stated by the bill of rights) has been violated, infringed or threatened.

Thursday, 26 July 2012
This is an Act of Parliament that was passed to make minor amendments to statute law. The passage of this Act, serves to underscore the government's... Read More...
FIDA and KCLF landscaped comparison

Tuesday, 01 June 2010
A bill now before Kenya's parliament would legalize abortion, making Kenya the first East African country to do so. The issue of abortion is highly... Read More...
Marriage Bill 2013

Thursday, 18 July 2013
The introduction of the 'Marriage Bill 2013' is an attempt to consolidate the various marriage regimes In Kenya. The current regimes which include... Read More...
The Assumption of the Office of the President Bill (2012)

Tuesday, 14 August 2012
The Assumption of the Office of the President Bill, 2012 is a bill that intends to provide for the procedure and ceremony for the assumption of the... Read More...