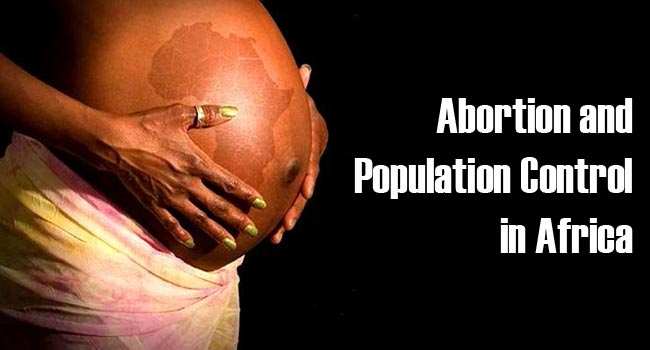 This is a story that has been repeated over and over in this country and beyond. A young girl gets pregnant at an untimely moment and is then forced to seek a solution to the 'problem'... most of the time, an unlawful and dangerous one. For Caroline Wanja Wanyaga, a 19-year-old high school student in her third year, an abortion seemed the only avenue she had to keep open the possibility of pursuing a university degree. The Tigithi Secondary school student was reported dead after procuring an abortion at Matanya sub-location in Laikipia County. She met her demise when efforts to ferry her to the nearest clinic became futile. According to the area assistant chief, Patrick Mathenge, the young girl died after aborting twins.

In light of the increasing number of such cases, the British government and the Bill and Melinda Gates foundation on the 11th of July 2012 hosted the London Summit on Family Planning that launched an initiative to give more than 120 million women worldwide access to voluntary family planning methods by the year 2020. The use of proper family planning methods has been suggested as a means of curbing abortion... as well as a means of controlling the population. It was at this international summit that the Prime Ministers of Ethiopia and Rwanda urged all African Leaders to increase funding for contraceptive services if they wanted to reduce poverty and hunger. During the summit, the world reflected on the ever-increasing population and how it was putting pressure on resources as well as impacting negatively on the quality of life. It was seen that in order to control the increase in population, it was important that both men and women have access to family planning methods as well as being given sufficient information about their use and side effects.

Few governments have population control policies and or national family planning programs. These countries include Ghana, Kenya, Mauritius, Morocco and Tunisia. Currently, most governments of African countries for the greater part either support family planning programs or allow such efforts exist under private auspices. Only the governments of Cameroon, Madagascar and Malawi have stated explicitly that they want to encourage population growth. From surveys done the East Africa, the ideal family size was between 5 and 6 children. In Ghana and Nigeria, the ideal size was 7 or more. In general, the ideal family size in Africa is between 6 and 8 children. As time has gone by however, the influence of urbanization and western education has reduced the ideal family size to be between 4 and 6 children.

With regards to modern contraceptive methods, the most knowledgeable group is the urban elite. Below that, the knowledge level tends to be very low. As such, there is very little contraceptive practice in Africa. For example, despite national family planning programs in Uganda, the fertility rates remain high. The country's fertility rate is estimated at 6.7 children, one of the highest in the world, but in most of its villages... the fertility rate can be as high as 10. It is fair to say that given the right conditions and policies, a country can support more people and reduce the number of people living in absolute poverty by creating alternative livelihoods and causing a shift from over dependency on agriculture.

It is unfortunate that as the situation stands, many people, both married and single, still don't have access to proper family planning methods. It is because of this unmet need that most resort to unconventional methods such as abortion, consumption of herbs and other ill advised cultural practices. The effect of most of these 'methods' has been tragic. Moris Onyango, for instance, lost his wife Hellen Akoth last month after she allegedly tried to procure an abortion at a clinic in Kware, Ongata Rongai. The abortion, as is often the case, didn't go as planned as she developed complications. She sought for help at the Kenyatta Hospital but by then, it was to late. She had lost a lot of blood. Akoth, already a mother of two, was in her fifth month of pregnancy when this happened. The couple had been married for 12 years.

Very many women in Sub Saharan Africa would like to stop or postpone childbearing, but are not using family planning. Improving access to contraceptives and other family planning methods as well as the relevant education is a critical policy that African governments and the international community must pursue. Giving women the ability to delay, space or limit births is vital in bringing down maternal and infant mortality rates.

In Rwanda, the percentage of married women using contraceptives rose from 13 percent in 2000 to 52 percent in 2010. In Ethiopia contraceptive use increased from 8 percent to 29 percent in the same period. The National Council for Population and Development in Kenya pointed out that Kenya would achieve its Vision 2030 only if the country managed its population growth. According to the council, the current population has doubled to 38.6 million over the last two decades and is estimated to reach 71.5 million by 2030, therefore posing a threat to the country's stability.

Regrettably, the contemporary use of abortion in Africa often substitutes for and at times surpasses modern contraceptive practice. This happens not only in adolescents, but also in older age groups, particularly where contraceptive use is low and access to clinical abortion is high (though largely illegal). Abortion seems to be the method of choice for limiting or spacing births. Consider the story of 'Mama Kevevia', who has procured six abortions for herself, and two for her 17-year-old daughter who dropped out of secondary school. She explains that this is her preferred method of family planning as she already has four children and didn't want any more. This is something she unfortunately does not regret, and is in fact worried now that abortion is illegal under the new constitution unless the health or life of the mother is in danger. She says that she chose abortion because her family has limited resources and that from what she'd heard... contraceptives were dangerous.

This is a common thing in rural areas where women usually resort to abortion, usually extremely unsafe procedures, rather than using contraceptives. Relatively high levels of abortion tend to correlate with low access to modern contraception. A low status of women, strong sanctions against out of wedlock pregnancies and a traditional tolerance to abortion doesn't help either.

A good number of pregnancies are unintended. Although some may have resulted from horrible situations such as rape or defilement, the most common cause is usually a failure to use contraceptives.

Visit the Linda Uhai Page to see how you can get involved with EACLJ and other like-minded organizations who are helping women by educating them on contraceptives and by providing services such as the Kiota initiative for women in crisis pregnancy situations.

Wednesday, 27 April 2011
The issue of abortion is widespread all over the world. However the level of its effect is varied in different parts of the world. In Africa... Read More...
Illegal Abortions on the Rise

Thursday, 08 August 2013
A recent survey has revealed that teenage pregnancies are on the rise. As a result, the Deputy President, William Ruto has issued a warning to chiefs... Read More...
Abortion In Morocco

Tuesday, 09 October 2012
'Women on Waves' (WoW) is an organization which was founded in 1999 by Rebecca Gomperts. After completing her training as an abortion doctor, Rebecca... Read More...
Babies Surviving Abortion Have a Right to Life

Tuesday, 18 March 2014
The Right to Life is universal and every human being is entitled to it.This is according to Article 3 of the Universal Declaration of Human Rights;... Read More...