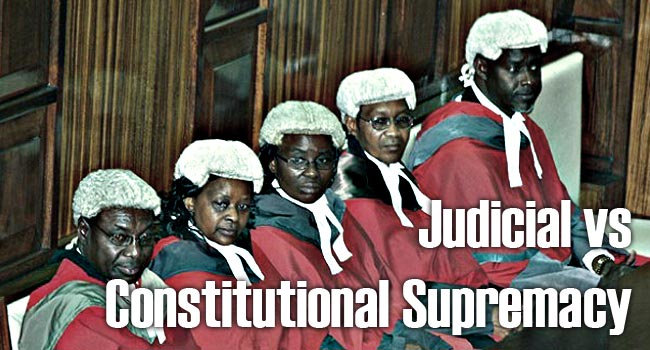 Following a public outcry against the alarming rate of impunity within our country's Judicial system, the Judges and Magistrates Vetting Board (JMVB) was instituted, subject to the Sixth Schedule, section 23 of the Constitution in order to clean up the mess that had been existing for a long time!

The schedule provides as follows:

"Within one year after the effective date, Parliament shall enact legislation...establishing mechanisms and procedures for vetting, within a timeframe to be determined in the legislation, the suitability of all judges and magistrates who were in office on the effective date to continue to serve in accordance with the values and principles set out.....

A removal or a process leading to the removal, of a judge, from office by virtue of the operation of legislation contemplated under subsection (1) shall not be subject to question in, or review by, any court."

It is in this spirit that the Judges and Magistrates Vetting Board (JMVB) recently declared certain Judicial officers unfit to serve in the courts following reviews of their previous works and involvements in judicial misconduct. However, the High Court recently stated that it had supervisory jurisdiction over the vetting board which it claims to be an inferior body and consequently ruled that the board does not have the final word on the vetting of judges. The judges declared unsuitable include Riaga Omollo, Samuel Bosire, Joseph Nyamu and Jeanne Gacheche, among others.

The High Court was swift to stop the removal of four judges from office until their petitions before the Court are heard and determined. The court made this decision in an application filed by the Law Society of Kenya (LSK) seeking a determination on whether the court had jurisdiction to review decisions made by the vetting board. The Law Society of Kenya has the statutory mandate to, among other things assist the government in all matters affecting legislation and to protect and assist the public in Kenya in all matters touching on the law

In a similar application, the High Court ruled among other things that it shall have jurisdiction to intervene and review the process and decisions of the Vetting Board. As a consequence, some of the Judicial Officers determined as unsuitable may continue to write judgments and deliver rulings that had been left pending. LSK views this ruling and judgment as unacceptable and unconstitutional.

Owing to this, there has been interplay of many questions and clashing opinions from different parties. The Law Society of Kenya has termed the High Court ruling as a backward step in the efforts to clean up the Judiciary. They want the Court of Appeal to determine if High Court has the authority to supervise and handle matters arising from the vetting of judicial officers.

Monday, 26 September 2011
With the promulgation of the new constitution last year, Kenya ushered in a new era in governance. Gone are the eight provinces, in their place, we... Read More...
The Vetting of Judges

Monday, 25 June 2012
By Maureen Kanyingi One of the contentious issues in the 2010 Constitution debate was Land. With the implementation of Constitution, several laws... Read More...
Abortion Scope Widened