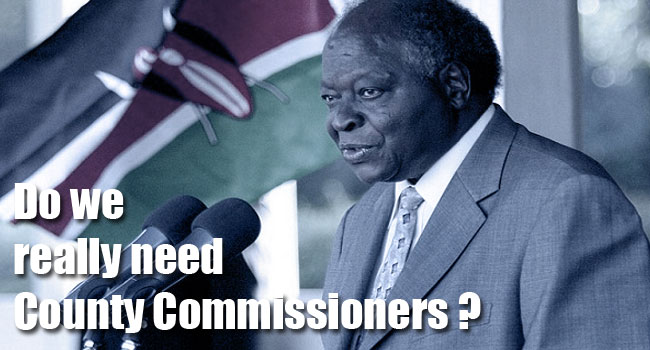 This week the President Hon. Mwai Kibaki appointed 47 County Commissioners. These were to replace the previous Provincial Commissioners under the old regime. This action has elicited a heated debate, since it took many by surprise. He based his actions on the transitional clauses in the Constitution. However, with the transitional clauses, the main purpose was to close gaps that may be found while the old Constitution is being phased out and the new one is being implemented.

The main criticism has been that the President did not consult with the Prime Minister prior to making the appointments. Another sector of the critics claim the appointments were not done in a transparent manner, and the public had no opportunity to vet the proposed appointees before they were gazetted. There is also the indication that regional and ethnic balance was not achieved in making the appointments.

The new constitution stipulates that there must be public participation, gender and regional balance and competitive recruitment in all public appointments. In the spirit of the new legal order, these ideals bind all state organs and state officers as provided under Article 10 on national values and principles of governance. Further, under the National Accord which was entrenched in the constitution, the President is required to consult the Prime Minister during appointment, the president acted in total disregard of the National Accord by not consulting the Prime Minister.

The East Africa Centre for Law and Justice holds the opinion, that of all that ail Kenyan society, National Cohesion is actually an urgent need. Rather than opening up new frontiers to this war against unity, the President should use his office to unite Kenya. The appointments were ill-timed, ill-advised and we can ill-afford them. Since the old Constitution is governing the transition of the change in the Executive and Legislature, it would be wise to time the change to coincide with the placements of Governors and County Assemblies. After all, these Commissioners will serve under these, if they are appointed. The Constitution leaves it up to the County Assembly to decide which Civil Servants it will retain, so it is possible, many counties may be content with a Governor, and not want a Commissioner at all. The EACLJ also holds the position that with the huge budget deficit of almost 50%, the upcoming General Election that is tipped to be the most complex and most expensive on so far, and the natural crises facing Kenyans, adding to the wage bill is something we cannot afford to do now. County headquarters have yet to be set up, where will these Commissioners be expected to do their job?

Law Society of Kenya, Federation of Women Lawyers, Constitution Implementation Commission are among some of the groups to publicly criticize the President's move. A suit has even been filed in Court to oppose the same appointments. The President has in the past been challenged on his appointments for example the appointment of Judge Visram as the Chief Justice, among others.

A Summary of the Recently Proposed Amendments

Wednesday, 27 June 2012
By Melissa Lukulu In the wake of the ongoing amendments that have evoked mixed reactions from Kenyans, it is a noble consideration to uphold the... Read More...
Role of the County Commissioners under the Devolved Government

Wednesday, 19 June 2013
Kenyans officially celebrated 50 years of independence on 1st June 2013. The celebrations, which came at a time when the government is working hard... Read More...
Removal of Governors from Office

Thursday, 26 February 2015
Devolution was and still is a very exciting idea to many Kenyans, especially since it is an assurance of their participation in governance through... Read More...
The County Governments