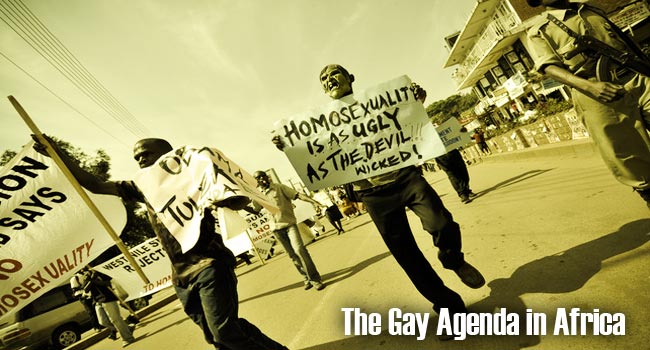 Just over one month ago, towards the end of June, the American Ambassador to Kenya, Ret General Scott Gration resigned from his position, citing 'differences with Washington' over his 'leadership style and certain priorities'. A rather interesting coincidence is that on the same week of his resignation, the American Embassy in Nairobi held a LGBT (Lesbians, Gays, Bi sexual and Trans Genders) pride celebration party. It is said that the former Ambassador, who was known for his strong Christian values (he was the son of missionary parents), did not attend the said event. The LGBT pride celebration is part of the Obama administration's policy to promote global LGBT rights. Similar events were held in various U.S. embassies around the world.

That the Obama administration is pushing a pro gay agenda beyond the American borders is not up for debate. This is something that has been well documented in the media. Reports say that some $3 million (KES 250 million) has been set aside to fund organisations and civil groups working on LGBT rights around the world. It is not only America though, the British Government in October last year announced a new foreign policy of tying aid to LGBT human rights situations in countries it supports. The European Union has weighed in on the matter as well through its Development Commissioner Andris Piebalgs who said that the EU is obliged under the EU treaty and the Charter of Fundamental Rights to combating anti gay hatred.

So the western world may be leading the queue in the pro gay movement, but is this something that would be compatible with the African culture? The Kenyan culture? The pro gay activists argue that there is a 'right wing Christian agenda' with intent to "establish a new legal infrastructure on the African continent that reflects the U.S. Christian Right's ideals." One could present an argument against this statement on two points. First, the so-called 'Christian ideals' are actually in line with African ideals. Second, if there is a movement to promote pro family ideals and values, then such a movement would only exist because there is another opposing movement that has recently (in the last few years) began to prominently operate in Africa.

A liberal group, the Political Research Associates, recently released a report that accused the ACLJ (American Center for Law and Justice) and other faith based western groups of importing homophobic political agendas into Africa. This report comes across as biased and inaccurate. As we have previously seen, it is very clear whose agenda is being pushed in Africa against prevailing cultural norms. It is widely known that most African societies and cultures promote strong family values that advocate for marriage to be between two consenting adults of the opposite sex. Most of their laws reflect this.

For example, Article 45 (2) of the Constitution of Kenya states that, every adult has the right to marry a person of the opposite sex, based on the free consent of the parties. The Penal Code criminalizes 'carnal knowledge against the order of nature' with a maximum penalty of 14 years imprisonment. Section 165 of the Penal Code specifically talks about indecent practices between males. It makes it clear that male-to-male homosexual acts are illegal in Kenya.

Despite what the new and popular constitution says, the Kenya National Commission on Human Rights (KNHCR), parts the civil society and some foreign governments are advocating for the promotion of LGBT rights. Recently, a prominent LGBT activist was appointed as a Judge of the Industrial Court and will serve in the Judiciary. Also, another activist recently stated their intention to run for political office in the coming general elections. Both worked at the Gay and Lesbian Coalition of Kenya (GALCK), a group known for fighting for equal rights for sexual and gender minorities.

What is happening here is that the Pro Gay western agenda has set up a culture war in Africa. In fact, the Voice of America recently reported that 'pressure from the United States, the United Nations and other international powers to protect gay rights . . . has . . . further entrenched homophobia among many in Africa. Threats to withdraw foreign aid have been met with defiance'. The LGBT groups and the governments that back them are promoting a political agenda. One that is not in sync with what the majority of Africans want and believe in. The suggestion that this is a 'right wing Christian Religious Idea' is flawed. There are other cultural belief systems that are against this. For example. The number of practicing Muslims in Kenya and Africa in general is very significant and it is a fact that in Islam, marriage can only be between a man and a woman.

Africa is a largely religious continent, and it has been for the longest time. This is a fact that should be respected and taken into consideration. A good argument could be put forward that African tradition, which focused a lot on strong families and on the continuity of lineage of clans, would consider homosexuality as unnatural. The Kenyan Justice and Constitutional affairs minister Eugene Wamalwa recently conceded to the United Nations Commission on Human Rights (UNCHR) that Kenyans were not ready to legalise same sex marriages. In a democracy, shouldn't the wishes of the majority be respected? Those who go around torturing, beating up or killing suspected LGBT people should face the full force of the law, as dictated by the Constitution. But legalizing and institutionalizing homosexual activity, mandating its approval, embedding it into our laws, essentially making it one of the building blocks of society, that is another matter altogether.

Friday, 06 July 2012
By Melissa Lukulu The new constitution is a document that most Kenyans gladly accepted and voted for vehemently during the referendum. Despite the... Read More...
Gay Awards Launched in Nairobi

Wednesday, 04 July 2012
By Melissa Lukulu The National Council for Persons with Disabilities (NCPWD) in collaboration with the Ministry of Gender, Children and Social... Read More...
Is homosexuality to be legalized in Kenya?

Monday, 20 May 2013
Mr. Ian Castleman, an Australian citizen who came to Kenya as a missionary. He is the founder of Ian Castleman Orphanage Kenya, said to be a mission... Read More...