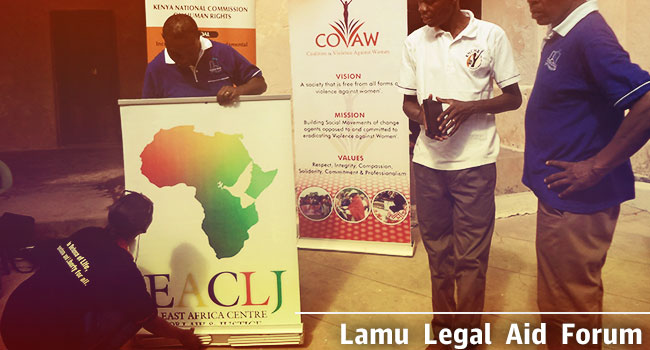 The EACLJ, as a member of the Complaints handling team participated in a Legal Aid forum that had been organized by the Kenya National Commission on Human Rights (KNCHR). The aim of the forum was to educate the public on human rights, receive petitions and offer legal/human rights advice to members of the public who attended. The County Commissioner was present to officially open the forum. He acknowledged the importance of advocating for human rights and promoting awareness. He also urged the public to seek a solution to their violated human rights in a lawful manner. The public was invited to participate by asking questions and making recommendations. This was quite an interactive session which lasted for about two hours. The area's women representative who was present inquired how Lamu County members can access the funds being sent. She also wanted to find out the amount allocated to women every year.
A representative of the persons with disabilities also asked questions on how persons with disabilities in Lamu could access help and facilities that would assist them acquire skills so that they could have access to employment opportunities and receive equal treatment like other able citizens.
The most common concerns elicited were on historical injustices and the fact that most of their people were never compensated by the government, especially on matters concerning land. They insisted that the government was quick to compensate and settle the people who were displaced during the 2007/8 post election violence but did not remember them. That complaint was taken up by the KNCHR to be forwarded to the Truth Justice and Reconciliation Commission (TJRC).
Members of Lamu County were however challenged to make sure that they engage their member of Parliament so that he would be able to follow up on the report that was released by the TJRC. The reason for this advice was that the report is already in Parliament and unless the MP follows up to ensure that justice is served to his people, it would be a rather difficult assignment to the complaints handling group.
There were issues of security and extrajudicial handling by the police in Lamu town. This was responded to by the representative from the Kenya Police who was part of the complaints handling team. He gave the people police hotline numbers that would ensure such officers are reported and action taken on them.
The main idea in most of the responses given was to ensure that the people were involved in the whole process and not just the complaints handling team only.