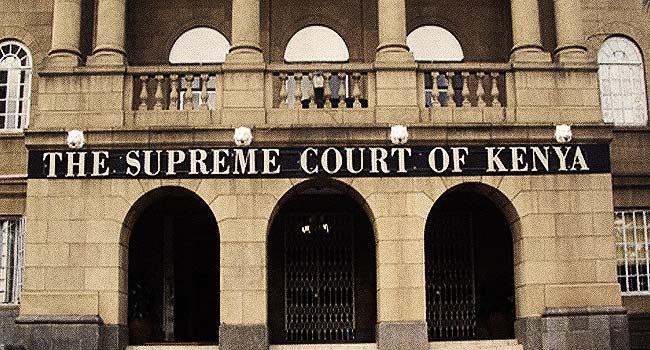 Kenyans on 4th of March, 2013 came out in great numbers to exercise their right to vote as citizens. The electorate conducted themselves in a very peaceful manner as they went to their respective homes immediately after casting their votes to wait for the results. The Chairperson of the Independent Electoral and Boundaries Commission (IEBC) had seven days to announce the results of the election after the day the people cast their votes. The chairman, Issack Hassan on Saturday declared Jubilee coalition candidate Uhuru Kenyatta the winner of the presidential election.

Article 140(1) provides that a person may file a petition in the Supreme Court to challenge the election of the President-elect within seven days after the date of the declaration of the results of the presidential election. Cord's Presidential candidate Raila Odinga, who was second, disputed the results stating that the process was not conducted in a free, fair and credible manner and would therefore challenge it in court. This move showed that politicians and political parties have confidence in the Judiciary to handle electoral disputes. It showed a new maturity in our democratic system, as this was not the case after the 2007 elections.
The Supreme Court shall hear and determine the petition within fourteen days after the filing of the petition. The decision of the Supreme Court shall be final.
The Supreme Court is prepared to hear any petition that may be filed impartially, fairly, justly and without fear, ill will, favor, prejudice or bias and in accordance with the Constitution and the Laws of the land.
If the Supreme Court determines the election of the President-elect to be invalid, a fresh election shall be held within sixty days after the determination.
If the court determines and declares the election valid, the president elect shall be sworn in on the first Tuesday following the seventh day after the date on which the court renders a decision declaring the election valid.
The Supreme Court comprises of Dr Mutunga who sits as its president, and Judges Philip Tunoi, Jacktone Ojwang', Mohammed Ibrahim, Dr Smokin Wanjala and Njoki Ndung'u as members.
Lady Justice Kalpana Rawal, who was recently appointed deputy Chief Justice, has not been sworn in and therefore cannot sit on the bench.
The Supreme Court registry will remain open from 7am to 8pm every day to enable any person challenging the presidential election outcome to file their cases. The registrar will have three days to publish the petition while the petitioners will also have three days to serve the respondents after filing. Upon being served, the respondents will have another three days to file and serve their response.
On the ninth day after filing the petition, the judges will hold a pre-trial conference during which they will agree on the modalities to be followed during the hearing.
The judges will then have two days to hear the petition. It will be a race against time since the judges will have only 14 days from the day the petition is filed to either throw out the petition or nullify the results and call for a fresh election.
The patience and upholding of peace that we demonstrated as a people should continue to reign as this process proceeds to court. Let us maintain peace.

The Assumption of the Office of the President Bill (2012)

Tuesday, 14 August 2012
The Assumption of the Office of the President Bill, 2012 is a bill that intends to provide for the procedure and ceremony for the assumption of the... Read More...
Kenyans for Kenya

Wednesday, 03 August 2011
By PhoebeDisappointment... this is a word whose meaning Kenyans have in the recent past had to unwillingly bear every single day of their lives.... Read More...
Mind of a Politician

Wednesday, 13 July 2011
By Phoebe The minds of politicians (Kenya's) have always been the hardest things to fathom due to the rate at which they are changed. Some claim that... Read More...
One-third, two-thirds what is the difference?