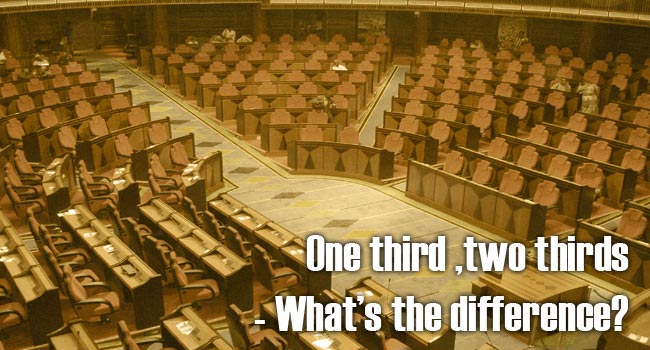 I have had a very interesting and eye opening experience today. In Kenya, there is the case currently in Court about the nominations to the brand new never been seen before in Kenya Supreme Court. For the benefit of those who do not know what this is, let me break this down for you. We passed a new Constitution last year that stipulated in it that the composition of all elective and appointive bodies will have to have no more than two thirds of one gender. The Supreme Court nominations have Two Women and Five Men. Has the requirement to not have more than two thirds of one gender been met? Lawyer Judy Thongori counsel for women lobby groups, who challenged the nomination of five Supreme Court judges on grounds that their nomination did not reflect gender balance.

The Federation of Women Lawyers Kenya Chapter (FIDA-Kenya) has led a group of several women's organizations to challenge this balance as failing to meet the Constitutional provisions. The Chief Justice has appointed some reputable Human rights lawyers to defend the Judicial Service Commission in the matter. Till now, I was a casual observer to this circus, since as you can tell from my earlier posts, my beef with the JSC was on a different tangent, but today they are not lucky, I am on their back again!

81. The electoral system shall comply with the following principles––

(b) not more than two-thirds of the members of elective public bodies shall be of the same gender;

I know either you have a eureka moment, or you are shaking your head wondering what I am on about. The moral of this whole story is this. The Supreme Court appointments may look like the are off not even by a whole person, so why the big deal. Think of a protractor, where you measure one degree from another is a single convergent point, but as the lines elongate, it becomes apparent that a degree from another travel very different paths and if you meet them after one kilometre, they will be so far apart. A builder puts a plumbline to determine whether a wall is straight, because even the smallest deviation, could see the whole structure collapse. If we are implementing this constitution, lets do it right, otherwise, in future the mess will be bigger than we could have imagined, and may be too late for us to fix. God bless y'all.

Monday, 26 August 2013
Political temperatures have been high past few days with calls for a referendum flying left right from different quarters. The crisis so far has been... Read More...
Kenya given Anti Terror Law Warning...

Wednesday, 07 March 2012
Kenya has been given a three-month ultimatum by the U.S to enact proper laws that will help in the fight against terrorism. Specifically, the U.S... Read More...
National Conference on Accessibility and Disability Rights

Wednesday, 04 July 2012
By Melissa Lukulu The National Council for Persons with Disabilities (NCPWD) in collaboration with the Ministry of Gender, Children and Social... Read More...
Analysis of the Leadership and Integrity Bill