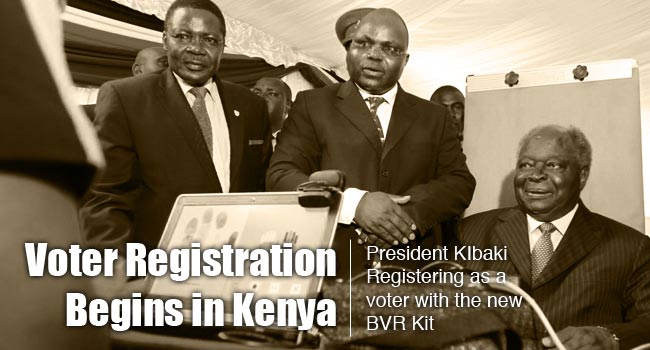 With the arrival of the Biometric Voter Registration Kits, a 30-day voter registration kicked off countrywide on Monday. The Independent Electoral and Boundaries Commission's (IEBC) target is to register at least 18 million voters. A total of 29 000 voter registration clerks have already been trained for the exercise.

The BVR Kits are expected to help curb election fraud by improving on the integrity of the registration. A voter's fingerprint and photograph are taken to ensure that the ones registering are the ones who will turn up to vote. The Biometric voter registration uses fingerprints and facial features to uniquely identify each voter. So Kenyans will only be required to produce their national identity cards during the voting process, in a move that is a major break from the past.

Issues like double registration, ghost voters and double voting should bot feature anymore with the adoption of this system. During the last elections, which resulted in the infamous post election violence, the manual voter registration was faulted by many observers as being one which was open to rigging.

The electronic registration process is taking place at 25 000 centres countrywide. Churches, schools, trading centres and markets will serve as registration centres. Registration will take place everyday, including Saturdays and Sundays from 8am to 5pm. All Kenyans are being encouraged to show up and register, irrespective of whether or not one has registered before in the past. There will be no extension after the 30 days, expected to end on the 19th of December. This is because there is a law that says that registration must conclude 60 days before the election, which is now scheduled for March 4th.

Meanwhile, the President has assured Kenyans of security during the registration process and has warned would be troublemakers against trying to disrupt the Voter Registration. There are some reports that the MRC are currently suing the IEBC, claiming that the commission doesn't have the legal authority to demarcate constituencies and wards in Coast Province, because they believe that the province was never legitimately incorporated into Kenya.

Wednesday, 10 October 2012
The President has declined to sign in the controversial Finance 2012 bill. He termed it as unconstitutional and unaffordable. What President Kibaki... Read More...
The Evolution of the Electoral Body in Kenya

Wednesday, 26 October 2011
The Electoral Commission of Kenya (ECK), now a defunct commission, was disbanded by the 10th Parliament in 2008 and replaced with the Interim... Read More...
Politics and Bad Marriages

Tuesday, 27 November 2012
By Mwana Falsafa Politics and Bad Marriages: Why You Need To Vote Wisely. If you have lived long enough, you most likely have seen it. A lovely... Read More...
IEBC's Report on Boundaries

Thursday, 12 January 2012
The Independent Electoral and Boundaries Commission (IEBC) has launched boundaries that define the new constituencies. The commission said it would... Read More...