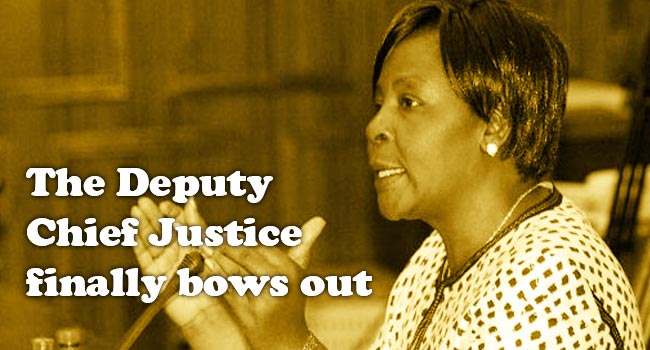 Public pressure, personal convictions, vested interests, legal counsel...name it. These are the countless possibilities that might have influenced the final act of Nancy Baraza, who had served as the Deputy Chief Justice (DCJ) of Kenya under the new constitution for seven months after being sworn in. Her resignation was seen as a relief to the Judiciary.

Nancy Baraza, who also acted as the Deputy President of the Supreme Court, was accused of assaulting a security guard by drawing a gun while the security guard tried to screen her during a routine security check at the entrance of a shopping mall in Nairobi. The security checks have become a requirement at malls, hotels, churches and other important buildings due to the on going terror attacks and threats in the country.

The matter was shortly committed to a tribunal for determination and upon the evidence produced; the tribunal found that the DCJ had committed gross misconduct and misbehavior. Rule 12 of the Judicial Service Code of Conduct and Ethics states as follows:

"A judicial officer and any other officer in the Judicial Service shall ensure that his official and private conduct upholds at all times, the dignity and integrity of the Judicial Service by conducting himself, both officially and in private, in a dignified, honest and impeccable manner."

The tribunal recommended for her removal from office, followed by a consequent bid by the Director of Public Prosecution to institute criminal charges against the DCJ. This was seen as an act to promote trust and efficient judicial services in the country.

Baraza handed in her resignation to the Judicial Service Commission (JSC), saying she expected no justice from the Supreme Court and in particular her immediate boss Willy Mutunga. Article 167(5) of the Constitution provides that the Chief Justice and any other judge may resign by giving a written notice to the President. She also withdrew her appeal to the Supreme Court against the Tribunal's decision, where she wanted the court to overturn the tribunal's recommendations and findings, stating that they could not form the basis of her removal from office. The suit was to be heard by a five-judge Bench comprising Chief Justice Willy Mutunga, judges Smokin Wanjala, Jackton Ojwang, Philip Tunoi and Njoki Ndung'u.

The Constitution of Kenya dedicates a whole chapter to Leadership and Integrity matters that is aimed at weeding out the unscrupulous breed of leaders and state officers that the Country has had in the past decades. Article 73 (1)(b) states that the authority assigned to a State Officer vests in him the responsibility to serve people rather than the power to rule them. Authority assigned to a State officer/Public officer is a public trust that should at all times bring honor to the nation and dignity to the office; promote public confidence in the integrity of the office and demonstrate respect for the people. Article 75 of the Constitution clearly states that whether in public places, official places, in private or in association with other persons, a state officer shall behave in a manner that avoids demeaning the office the officer holds. These measures have been put in place to ensure impeccable performances in the various institutions of this Nation, and the Judiciary should be at the fore-front in restoring the people's confidence in the system.

Baraza's predicament has been seen as a test of the spirit of equality of all before the law. Chapter Six of our Constitution deals with leadership and Integrity. This is important because the public needs to have confidence in the constitutional offices. All State officers are constitutionally required to bring honour to their office in both their public and private dealings. Kenyans should make an effort to promote the spirit of the Constitution by electing a new 'crop' of leaders who are ready to serve with integrity, accountability, discipline and commitment, and whose behaviors' are above reproach.

Understanding the Law in the Nancy Baraza Case

Tuesday, 17 January 2012
Lady Justice Nancy Baraza, the Deputy Chief Justice and the Deputy President of the Supreme Court, is alleged to have assaulted a security guard Ms.... Read More...
KCP Statement on the JSC Judicial Nominations