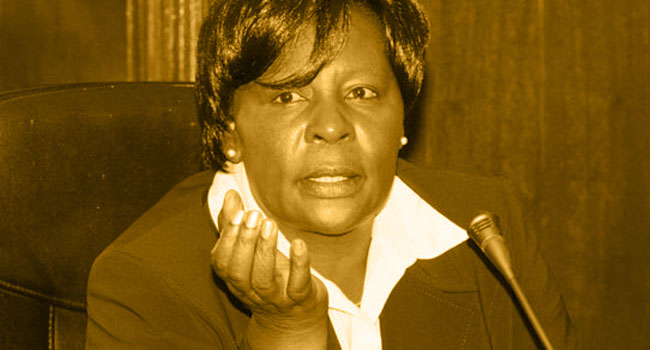 Lady Justice Nancy Baraza, the Deputy Chief Justice and the Deputy President of the Supreme Court, is alleged to have assaulted a security guard Ms. Rebecca Kerubo, on New Year's Eve at the Village Market, an upmarket shopping mall in Nairobi. Justice Baraza is accused of drawing a gun on the security guard who was trying to screen her during a routine security check at the entrance. The security checks have become a necessity at malls, hotels, churches and other important buildings because of the on going terror threats which have resulted from Kenya's war against the al shabaab.

In this new constitutional dispensation though, the Deputy Chief Justice is finding the going tough for her as a keen public watches to see whether the new judicial team will resolve this case in an impartial and fair manner – by strictly following the rule of law as stipulated in the constitution. Article 75 of the Constitution clearly that whether in public places, official places, in private or in association with other persons, a state officer shall behave in a manner that avoids demeaning the office the officer holds.

The Police believe Justice Baraza should face gun charges. Some of the charges they are likely to recommend are unlawful possession of a firearm, illegal use of a firearm and threatening to kill. However, after reviewing the evidence submitted to him by the police, the Director of Public Prosecutions Keriako Tobiko dismissed it claiming that it was not enough to prosecute the Deputy Chief Justice. Mr. Tobiko stated that the case put together by the police was full of gaps, inconsistencies and contradictions. He gave the police seven days to fix it. He further claimed that the CCTV footage of the incident had not been included in the submitted evidence. The office of the Director of Public Prosecutions is concerned with looking at the criminality and charges in the matter while the Judicial Service Commission (JSC) is concerned with alleged professional misconduct.

The Deputy Chief Justice has already appeared before the Judicial Service Commission (JSC) for questioning. The JSC, according Article 172(1) of the Constitution, paragraph (c), can "appoint, receive complaints against, investigate and remove from office or otherwise discipline registrars, magistrates, other judicial officers and other staff of the Judiciary, in the manner prescribed by an Act of Parliament." According to the constitution, the only action that can be taken by the JSC is to recommend to President Mwai Kibaki that a tribunal be set up to investigate her conduct. So after holding evidentiary hearings and interviewing several material witnesses, the Judicial Service Commission has gone ahead and recommended the suspension of Justice Baraza. The Chief Justice Willy Mutunga on Friday said that the sub-committee he appointed to investigate her conduct had resolved to send a petition pursuant to Article 168 (4) to President Kibaki with a view of suspending her as Deputy CJ and as a judge of the Supreme Court.

If there is no evidence of the Deputy CJ assaulting the guard, she will be cleared. On the other hand, if it is found that she conducted herself inappropriately, she might be requested to honorably resign or face a tribunal. Alternatively, sanctions might be imposed upon her if found guilty and allowed to continue in office.

Article 168 gives clear stipulations and guidelines that can be used/ applied to remove a Judge of a superior court from office. These are summed up below:

While some may see Justice Baraza's predicament as an embarrassment to the judiciary, it is nevertheless a test of the spirit of equality of all before the law. Chapter Six of our Constitution deals with leadership and Integrity. This is important because the public needs to have confidence in the constitutional offices. All State officers are constitutionally required to bring honour to their office in both their public and private dealings. This is a crucial test involving the newly appointed Judicial Service Commission, which has been tasked with guiding reforms in the judiciary.

Wednesday, 26 October 2011
Characteristics of Devolution Two or more levels of government established by law Coordinated yet none is subordinate to the other/ none is an agent... Read More...
The Constitution Review

Monday, 12 April 2010
Why is a National Constitution important? The Constitution is the most important governance tool in any country since it is the mother law upon which... Read More...
Is The Goal of Islam World Conquest?

Thursday, 03 June 2010
The following is a statement by the late Ayatollah Khomeini about the goals of Islam. Islam makes it incumbent on all adult males, provided they are... Read More...
Judicial vs Constitutional Supremacy

Wednesday, 07 November 2012
Following a public outcry against the alarming rate of impunity within our country's Judicial system, the Judges and Magistrates Vetting Board (JMVB)... Read More...