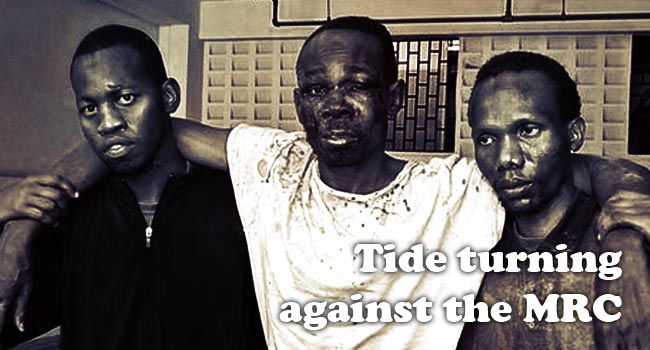 The self-styled Mombasa Republican Council (MRC) 'President' Omar Mwamnwadzi has just been granted bail on a 3 Million shilling bond. The leaders of the group have either been arrested or been on the run since a renewed crack down by the government. This is in stark contrast to the jubilant scenes by supporters when a court ruled in favour of the group, effectively giving them a chance to be a legal entity. Two years ago, the Minister of State for Provincial Administration and Internal Security, the late George Saitoti had published a Gazette Notice (No. 12585), which stated that the MRC was an organized criminal group that was unconstitutional. Despite all the controversy surrounding them, the MRC then filed a petition to the court seeking determination on whether or not they should be considered unconstitutional. Subsequently, after a careful assessment of the facts at hand and the position of the law, the High Court lifted the ban on the MRC, giving them licence to pursue their agenda – as long as they remained within the confines of the law. But since then, the Country has witnessed a spate of violent attacks and confrontations between law enforcement officers and members of MRC. So what changed the tide against them once again?

According to the police, there have been a series of events attributed to the MRC that prove that the group has extremely questionable and dangerous motives. Last March, members of the group disrupted an Electoral and Boundaries Commission (IEBC) Mock Election being conducted in Malindi. Armed with machetes, they attacked staff and voters claiming that since Pwani was not a part of Kenya, they weren't going to allow the election exercise to continue. The group then threatened to disrupt the on-going Kenya's National Examinations while again telling residents to abstain from voting in next year's general election. On October 8th, seven MRC members were arrested and charged with inciting violence for their role in an attack at a rally for Fisheries Minister Amason Kingi, in which four people lost their lives. Infact, the Internal Security Minister Katoo Ole Metito has revealed that an investigation has shown that MRC members were to blame for a spate of insecurity cases that have recently plagued the region. He explained that the group poses a series threat because of their intention of disrupting the coming General Elections. The Coast Provincial Commissioner is of the opinion that the MRC are using violence as a strategy to seek attention for their agenda. The Coast Police Chief believes the MRC is taking advantage of the High Court ruling that was in their favour to freely engage in criminal activities. The Attorney General however appealed against that ruling in August, citing the group as a threat to national security. The case is now pending in the Court of Appeal.

Meanwhile, a fresh ban has been slapped on the MRC by the government after a Court established that the group was not registered and was therefore an illegal entity. The Court further ordered the police to arraign all the group's leaders to face charges in Court. Currently, nominated MP Sheikh Dor, the MRC Chairman and his wife, the MRC spokesman and the MRC treasurer face various charges including incitement, unlawful possession of firearms and funding the activities of an illegal group. President Kibaki in his Mashujaa day speech warned the MRC that Kenya is a unitary state and that any thoughts of secession would not be entertained. The President promised hard and decisive action against the group and anyone else who threatened the peace of the country. The President also rubbished MRC's claim to the coastal strip as a distortion of history.

The MRC has consistently been loyal to its mantra "Pwani si Kenya" (The Coast is not part of Kenya), citing a treaty between the British Colonial government and Sultan Seyyid Hamed bin Thwain, who was the then Sultan of Zanzibar, as proof of the autonomy of the coastal strip. The group further attributes its secessionist drive to what it deems to be historical injustices that revolve around land and unfair distribution of national resources. The MRC may have legitimate grievances that need to be addressed and looked into. But they are losing and will continue to lose the sympathy of Kenyans with their continued insistence on violence and secession. Trying to divide Kenyans especially with the 07-08-post election violence still in our recent past is a dangerous way forward. Reports of leaflets circulating in the coast warning 'non coastal people' to leave the region are very sad indeed. This sort of thinking should be discouraged. Threatening to disrupt the coming elections is a rather myopic way of looking at things. In the new dispensation availed by the new Constitution, one of the ways the people of Mombasa and the coastal region in general can address and correct what they believe to be historical injustices, is by electing the right leaders in the coming elections. These leaders can then ensure better policies for the region, which will ensure a better Kenya for us all.

An In-Depth Look At The Elective Positions

Tuesday, 15 January 2013
There are six elective positions that the electorate will be required to elect leaders come March 4th. This is a new phenomena introduced by the new... Read More...
The Election Date Debate Continues...

Thursday, 19 January 2012
Kenyans are yet to know when exactly the country will hold its next elections. Regardless, several events have occurred that are bringing us closer... Read More...
Understanding The Process in Election Dispute Case at the Supreme Court

Tuesday, 12 March 2013
Kenyans on 4th of March, 2013 came out in great numbers to exercise their right to vote as citizens. The electorate conducted themselves in a very... Read More...
Your role in the Electoral Process

Tuesday, 04 December 2012
The sovereign power belongs to us, the people. You and I are to exercise this sovereignty either directly or indirectly through democratically... Read More...