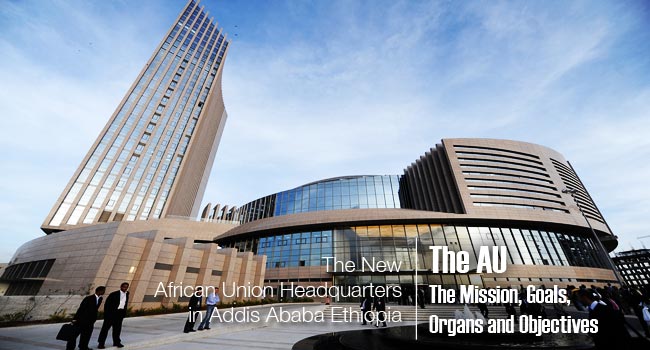 The Vision and Mission

The AU was formed with the overall mission of speeding up integration in the continent in order to enable Africa to play its rightful role in the global economy while at the same time addressing a myriad of economic, political and social problems currently plaguing its member states. The AU succeeded the Organization of African Unity (OAU), which had failed due to multiple reasons.

The AU is based on the common vision of a united and strong Africa and on the need to build a partnership between governments and all segments of civil society, in particular women, youth and the private sector, in order to strengthen solidarity and cohesion amongst the peoples of Africa. It focuses on the promotion of peace, security and stability on the continent as a prerequisite for the implementation of the development and integration agenda of the Union. Ultimately, the AU is building towards a greater unity and solidarity between the African countries and its people.

Article 3 of the Constitutive Act of the AU provides the following as the objectives of the African Union:

The AU consists of the following organs:

Composed of Ministers or Authorities designated by the Governments of Members States. The Executive Council is responsible to the Assembly.

The Court of Justice

A Court of Justice of the Union shall be established. The statutes defining the composition and functions of the Court of Justice have been prepared and will be submitted to the Assembly in Maputo.

By decision AHG/Dec 160 (xxxvii) of the Summit of Lusaka, July 2001, a decision was made for the creation within the African Union of the Peace and Security Council. The Protocol establishing the PSC is in the process of ratification.

The Commission is the key organ playing a central role in the day-to-day management of the African Union. Among others, it represents the Union and defends its interests; It elaborates draft common positions of the Union; It prepares strategic plans and studies for the consideration of the Executive Council; It elaborates, promotes, coordinates and harmonizes the programmes and policies of the Union with those of the RECs; IT ensures the mainstreaming of gender in all programmes and activities of the Union.

Members of the Commission

The following Specialized Technical Committees are meant to address sectorial issues and are at Ministerial Level:

Wednesday, 27 June 2012
By Ken MbaabuTanzania is going through one of the most important phases in the history of any modern day democracy. This is especially important... Read More...
New Bills assented by the President

Wednesday, 07 March 2012
Kenya has been given a three-month ultimatum by the U.S to enact proper laws that will help in the fight against terrorism. Specifically, the U.S... Read More...
TNA Launch - A Reflection of our Political Parties