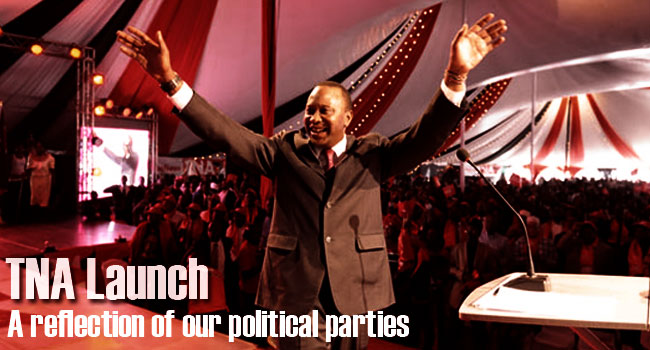 On Sunday 20th May 2012 Mr Uhuru Kenyatta, son of Kenya's founding President Jomo Kenyatta unveiled his new political Party, The National Alliance as the new vehicle he intends to use to clinch the presidency in Kenya's next general election. The highly publicized event was markedly sophisticated with a lot of high tech, state of the art technology. The event is estimated to have run on a budget of between 150-200 million Kenya shillings. The unveiling of his political party has officially put Uhuru Kenyatta firmly into the race for State House. It is not a secret that the Deputy Prime Minister fully intends to vie for the highest seat in the country, something he has clearly indicated in the past during many public rallies he has held and also due to his close association with the G-7 alliance. His biggest hurdle however, will always be the charges of crimes against humanity that he is facing at the International Criminal Court. These charges have also brought into question his suitability to hold pubic office especially in light of Chapter 6 of the Kenyan Constitution which deals with the integrity of holders of public office.

An interesting aspect of this launch is the fact that Mr Uhuru Kenyatta has officially ditched KANU (Kenya African National Union), the political party that launched his political career and sponsored him to parliament in the first place. He ran as KANU's candidate in the December 2002 presidential election, but lost to the Opposition's candidate Mwai Kibaki by a large margin. In early April, it became apparent that Mr Kenyatta was leaving Kenya's oldest party KANU, of which he was chairman, when he indicated that he was not going to seek any elective post in the upcoming party elections.

That move by Uhuru Kenyatta is indicative of how weak our political parties are. It would seem that political parties in Kenya are just electoral outfits created by individuals with the sole aim of clinching power. Political parties tend to be personalized institutions with an excessive focus on power, rather than on policies that would serve the people.

In his key note address, Uhuru Kenyatta stated, "The Principles of why political parties exist have been greatly abused before. The National Alliance seeks to dispel the Belief that politicians are bigger than party ideologies. The new political parties act has taken up its big brother role and any party that pursues an individualistic agenda and personality cults has no future in the Kenya of today." This is totally true but it's contrary to what he has been practicing.

Kenya's political parties are built around personalities and ethnicity and not national interests or principles. In 2007, Mr Kenyatta, who was then the official opposition leader, shifted his alliance and supported the re-election of the incumbent President Mwai Kibaki. He made history in becoming the first opposition leader to defect from the opposition to support the incumbent President after opposing the government for almost five years.

Section17 (3) of the Political Parties Act 2011 bars any person from belonging to multiple political parties at the same time. The law also says that members of a party who publicly advocate the formation of another party or promote another party's ideology, interests or policy would be deemed to have resigned from their previous parties. Politicians violating this law are not meant to still be serving in Parliament.

The East Africa Centre for Law and Justice's position is that political parties should be institutionalized and structured on ideologies and values that will end up strengthening them to play a positive role in the socio-economic and political development of the country. We advocate for the full implementation of the Political Parties Act to help regulate political parties so as to instil discipline and inculcating democratic culture. Our desire is to see parties that are anchored on firm structures, rules, procedures, norms and principles.

Thursday, 13 December 2012
As Kenyans prepare for the coming General Elections, it is important to understand the roles of the people they will be voting for. The Constitution... Read More...
Politics and Bad Marriages

Tuesday, 27 November 2012
By Mwana Falsafa Politics and Bad Marriages: Why You Need To Vote Wisely. If you have lived long enough, you most likely have seen it. A lovely... Read More...
Your role in the Electoral Process

Tuesday, 04 December 2012
The sovereign power belongs to us, the people. You and I are to exercise this sovereignty either directly or indirectly through democratically... Read More...
EACLJ now an Election Observer

Thursday, 27 September 2012
Following an invite of applications by the Independent Electoral and Boundaries Commission (IEBC) in conformity with international best practices and... Read More...