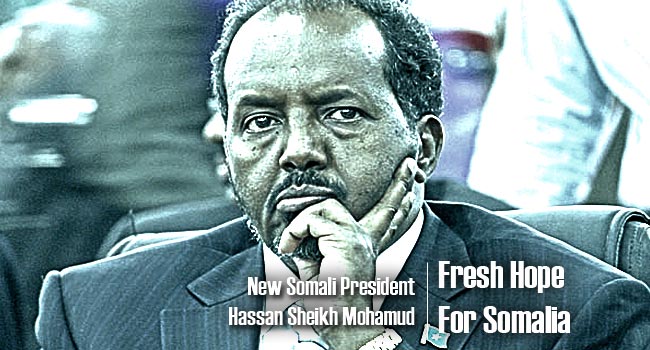 For the first time in 43 years, Somalia elected a formal leader. This officially marks the end of an eight-year transitional administration in the war and famine ravaged nation. Both old and young took to the streets to welcome President Hassan Sheikh Mohamud who was declared President of the Federal Republic of Somalia by the parliament speaker.

It was by a landslide that the 57-year-old founder and chairman of the Peace and Development Party won over former President Sharif Sheikh Ahmed. Mohamud also beat a score of other candidates, including the once United States based technocrat Prime Minister Abdiweli Mohamed Ali and Maslah Siad Bare, son of the former Somali President.

Hassan Sheikh Mohamud, a political newcomer, won the election against outgoing President Sheik Sharif Sheikh Ahmed by the legislative vote of 190 to 79, according to Parliament Speaker Mohamed Osman Jawari. Mohamud thanked the new parliament for electing him as the nation's leader and asked the Somali people to collaborate with him to restore the country.

Mohamud's election is therefore a budge to the fore but the President will need the support of his countrymen to bring change to the country. This is because Somalia's problems are too big for one person to solve alone. They include piracy at sea, terrorism, a lack of institutions and hundreds of thousands of refugees. The new President will have to address a humanitarian situation, which the United Nations has often described as the worst in the world.

President Mohamud has promised to bring Somalia back into the international fold, but he inherits an ongoing war and powerful warlords. While Somalia has had transitional administrations since 2004, it has not had a functioning central government since 1991, when warlords overthrew a longtime dictator and turned on each other, plunging the impoverished nation into chaos. The country has been characterized by political bickering, violent threats and seat-buying schemes which has delayed the progress towards a transitional government.

Somalia has however seen much progress over the last year. Al Shabaab militants, who are linked to Al Qaeda, were forced out of Mogadishu in August 2011. This has allowed businesses to thrive while also witnessing a return of the arts and sports. Al Shabaab has lost control of Mogadishu and has ceded the control of towns in western Somalia. The militants largely fled to northern Somalia and Yemen, but some retreated to Kismayo, the last major town in their control.

Last month Somali leaders endorsed a new provisional constitution that expands rights for Somali citizens. The United Nations, which helped broker the constitution and is in charge of the poll, hopes that one day all of Somalia will be able to vote to endorse or reject the constitution.

Many young people in Somalia hope that the new president will improve the country's education sector, which is among one of the key organs paralyzed in the two decades of war. President Mohamud is famous for being one of the founders of the Somali Institute of Management and Administration Development (SIMAD), which became Simad University. Established in 1999, it is the first institute of its kind since the collapse of the Somali state. As of last year, close to 4,000 students were registered in its undergraduate programs and, since 2002, over 1,500 students have graduated with diplomas in various disciplines.

The International Community stated that the move to elect a new President in the country is a key step toward the East African Nation's transition from a war-torn failed state to a nation with an effective government. Electing Mohamud is seen as a vote of change from the previous government, which has faced accusations of engaging in unlawful activities. A report written for the United Nations in June stated that the previous government was rife with corruption. The respected lecturer and peace activist now faces the task of putting together a capable and credible government after more than a decade of transitional administrations largely seen as corrupt and inept.

The election of a new President raises hope that Somalia could emerge from two decades of civil war, but a recent attempt on his life reminded Hassan Sheikh Mohamud of the tough road ahead. There was a suicide assail at the gates of a hotel in Somali's capital, Mogadishu, where the new President was staying, only two days after he was elected. The blasts took place as the President was holding a press conference in the Jazeera Hotel with visiting Kenyan Foreign Minister Sam Ongeri. The meeting however went on successfully after the thwarted terrorist attack.

Such attempts to push the country back into chaos and violence should not deter the Somali people's determination to move forward.

More Terror Attacks and the Prevention of Terrorism Bill

Wednesday, 04 July 2012
By Melissa Lukulu Another Sunday has departed and what remains is apprehension coupled with citizens who are close to complacent to the pattern of... Read More...
Repatriation Of Refugees

Wednesday, 05 June 2013
The IGAD (Inter-Governmental Authority on Development) Heads of State and Government Summit held it's 22nd Extra-Ordinary session on the 24th of May... Read More...