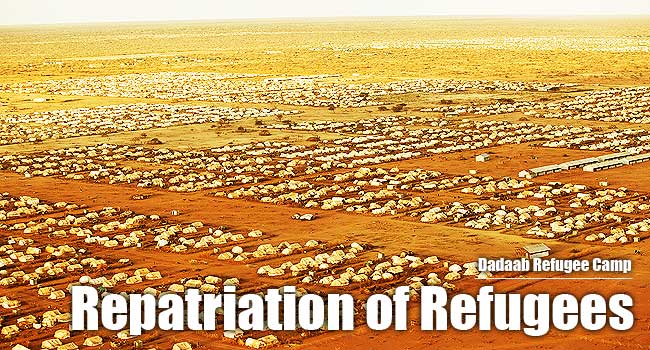 The IGAD (Inter-Governmental Authority on Development) Heads of State and Government Summit held it's 22nd Extra-Ordinary session on the 24th of May to discuss the political situation in Somalia. The Addis Ababa meeting was chaired by the Ethiopian Prime Minister, Hailemariam Desalegn. It was attended by, among others, Kenya's Uhuru Kenyatta, Uganda's Yoweri Museveni and Somali's Hassan Sheikh Mohamud. During that meeting, it was resolved by the African leaders to repatriate thousands of Somali refugees living in Kenya and Ethiopia back to Somalia. The new Kenyan Foreign Affairs Secretary Amina Mohamed and her Somalia counterpart Fawzia Yusuf Adam met on Friday under the direction of their respective Presidents to further discuss the translocation of the refugees. A statement from the Ministry of Foreign Affairs said that the two had agreed to convene an international conference on Somalia, to be held in Nairobi. The conference is meant to discuss and work out the details on the safest and most orderly way to return the refugees.

Dadaab is a town in Garissa County, about 100 KM from the Kenya-Somalia border. It is home to six refugee camps: Kambioos, Dagahaley, Hagadera and the three Ifo Camps. Dadaab was set up in the early 90s and hosts people that have fled various conflicts in the larger Eastern African region. Dadaab is now home to the largest refugee population in the world. It has well over 500 000 people, 96% of whom are Somali nationals. Dadaab has been thought to pose a serious threat to Kenya and the surrounding region. Two years ago, two Spanish aid workers were abducted from the camp and this has led some analysts to believe that militia from Al Shabaab may have infiltrated the refugee population. Dadaab is also believed to be a trafficking route for small arms and humans. Since the launch of Kenya's incursion into Somalia in 2011, Dadaab has experienced a sharp rise in attacks by Al Shabaab sympathizers targeting Kenyan police and aid workers with gunfire, explosive devices and abductions. The rising insecurity coupled with a shortage of funds has seen relief efforts reduced to a bare minimum.
Last year February, the then President Mwai Kibaki (now retired) while speaking at the London Conference on Somalia said that the over crowded camps at Dadaab posed a security threat and that Kenyan was no longer able to carry such a large refugee burden. He asked the international humanitarian community to take advantage of the areas in Somalia that had already been liberated by the Kenya Defence Forces (KDF) and the African Mission in Somalia (AMISOM) and return the refugees home.

Following the resolutions at the IGAD Summit and following the activities of the Kenyan Foreign Secretary since, it is clear that the new government is keen on following through with the former President's wishes. Indeed, Deputy President William Ruto had a recent meeting with Mr. Ban Ki Moon at the UN offices in Yokohama, Japan where the UN Secretary General pledged to support efforts to resettle the displaced families.Despite the plans that are underway, aid agencies and other humanitarian organizations have deemed this move to be impractical. For repatriation to be effective it has to be voluntary and the conditions have to be conducive and sustainable. Kenya is a signatory to The 1951 Refugee Convention, which prohibits the involuntary return of refugees to a country where the threat of persecution persists. The 1951 Convention relating to the Status of Refugees is the key legal document in defining who is a refugee, their rights and the legal obligations of states.

Saturday, 05 October 2013
The events of 21st September 2013, have left indelible memories to Kenya as a Country and further raised more cognizance on the dire need of... Read More...
Aftermath of the Terror Attack at Westgate Shopping Mall - Nairobi

Thursday, 03 October 2013
21st September 2013 was a dark day for Kenya, when the very popular Westgate Mall was attacked by Al Shabaab militants. The reason given for this is... Read More...
More Terror Attacks and the Prevention of Terrorism Bill

Wednesday, 04 July 2012
By Melissa Lukulu Another Sunday has departed and what remains is apprehension coupled with citizens who are close to complacent to the pattern of... Read More...
Fresh Hope For Somalia

Friday, 14 September 2012
For the first time in 43 years, Somalia elected a formal leader. This officially marks the end of an eight-year transitional administration in the... Read More...