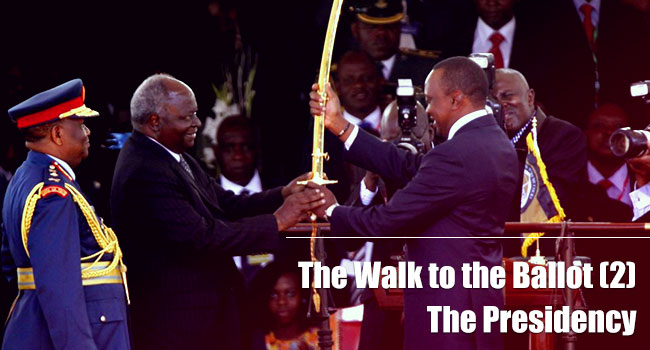 Now, the queue has diminished a bit and it's your turn to go through the 'voter dip'. So you hand in your national ID and voters' card to the introvert neighbor down the block who is now the election officer. He might try to run your prints through some voter identification device but depending on where you are voting from, chances are it won't work. Anyway, he will cross your name on a manual register and hand you back your documents and six blank papers to fill. Today, we deal with the first and most important; the President.

With the debate around kits and allegations of corruption, there is little chance that everything will be error free come August. As a matter of fact, don't be surprised if some problems are aggravated.

But first things first, let's start from the beginning. Who is a President? Well, the basic definition is the leader of a country or part of it in a democracy, republic or dictatorship. In Kenya, and under the Constitution, the President is not only the Head of State and Government, but also a symbol of national unity, the chairperson of the National Security Council and the Commander in Chief of the Armed Forces.

The President and the Deputy President have an honorific title and are referred to as His/Her Excellency. It's no different from calling a Judge 'Your Honor' or the Queen 'Her Majesty/ the Royal Highness'.

So who can become President? One of the most repeated quotes by teachers through primary school was "anyone can become President", today I come to tell you, that's not entirely true. The constitution of Kenya provides the following criteria as the qualification for election as President;

Back to our election day scenario, now that you have made your way to the temporary booth in the classroom, most probably a carton cube, the assumption is that all the people whose pictures appear on the ballot paper will have satisfied the above criteria. This is because it is the mandate of the IEBC to register the candidates and verify their qualifications.

Before you ink a mark on your preferred candidate, you need to have the answer to another important question; What exactly is the work of the President?

In previous elections, you may probably remember that one of the first things that the President did after being declared the winner of the Presidential Election was to appoint a Vice-President. However, the new Constiution has brought about a new dispensation where a Presidential Candidate is now required to annouce a running mate who will become the Deputy President in the event of a win. The running mate's name is actually inculded alongside the Presidential candidate's name in the ballot paper.

Another task the newly elected President is supposed to do is to form a Cabinet. Unlike the past, the Cabinet shall comprise of persons who are NOT in the National Assembly.

The full list of the functions of the President are provided for in the Constitution under Chapter 9. They are;

Here is an interesting thing to note; there is actually no specific provisions giving effect to the conception that the President's term is five years. You may have noticed that the current President, His Excellency Uhuru Kenyatta, will serve a first term of four and a half years. Until such a time as there is a presidential candidate and the President-elect is sworn in, the incumbent remains in office.

With this information in your possession, it is my contention that you are ready to mark and dispose off the first ballot. The next part will be about devolution and the second ballot, "the Governor".

Register To Vote
Wednesday, 24 February 2016
EXERCISING THE RIGHT TO VOTE Elections and the voting process are an integral part of democracy in any republic. Every once in a number of stipulated... Read More...
Kenya given Anti Terror Law Warning...

Wednesday, 07 March 2012
Kenya has been given a three-month ultimatum by the U.S to enact proper laws that will help in the fight against terrorism. Specifically, the U.S... Read More...
President Obama Ignores Pro Choice Agenda In Kenya

Thursday, 13 August 2015
The President of the United States Barrack Obama was in Kenya recently for an Official Visit and to open the 6th Global Entrepreneurship Summit... Read More...
The Election Date Debate Continues...

Thursday, 19 January 2012
Kenyans are yet to know when exactly the country will hold its next elections. Regardless, several events have occurred that are bringing us closer... Read More...