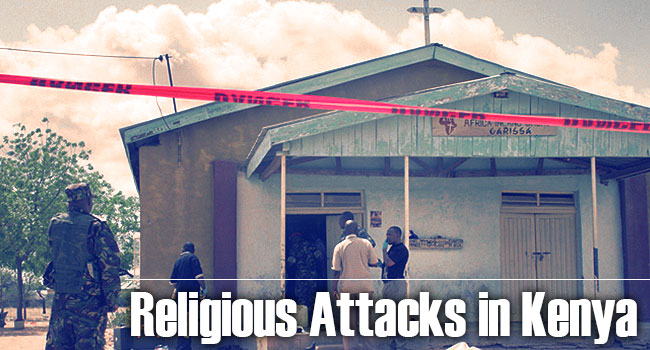 This statistics of event is neither pleasing nor exciting. There is clearly a problem; if solutions were easy to come by however we would not be calling it a problem in the first place. Attacks on religion are complex just like acts of terrorism. One cannot completely fathom the reasons why one would be motivated to commit such a crime and finding ways of curbing such acts are not easy.

As society develops, it is clear to see that society generally has not reached a point of acceptability of our differences. We have reached a point where our differences are causes of war and terror. However we have not reached an end on how to curb this problem.
So far parliament has enacted legislation to ensure that individuals have freedom of religion and conscience and the freedom of security of the person as per the requirements of the Constitution and regional and International. The Judiciary through Article 23 have upheld and enforced the bill of rights which includes freedom of security of the person and the freedom of conscience, religion belief and opinion. The Executive has enforced these laws as required. One needs to note that laws are the first step. Just because legislation exists does not mean that society will adhere to it. Presence of retributive measures or punishments for law breakers does also not curb attacks. For now however that's all we have. The Judiciary will have to be diligent in ensuring that perpetrators are seriously dealt with.
The Police force on the other hand who are the main participants in catching perpetrators and bringing them before a court of law must be diligent. This process of transformation and justice begins with them.
It is rather sad to observe that so far no action has been taken against perpetrators of evils against religious leaders in Kenya and also for destruction of some of their places of worship.
The series of laxity from the police and government need to end. It would be wise to educate the public on the importance of acceptability of our differences. Harsh punishments need to be advocated for in the penal code against the individuals who commit such offences. This is a complex social crime which might just need a social based approach in curbing it.

Tuesday, 20 April 2010
We will be a better world when each religious group can trust its members to obey the dictates of their own religious faith without assistance from... Read More...
Insecurity in Nigeria

Friday, 13 September 2013
Nigeria has had its share of insecurities which have raised concern not only in the country but in the African continent and of course the world at... Read More...
Religious Extremism a Threat to Kenya's Security

Monday, 17 February 2014
The world today is faced by many issues, from natural calamities to financial struggles and even insecurity. It may not be felt in all parts of the... Read More...