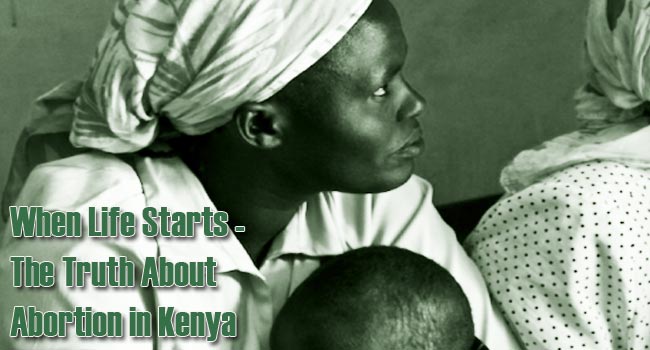 There has been a heated debate about; when life begins, the legalization of abortion and the Justification for such legislation.
As Medical and Legal PROFESSIONALS and EXPERTS in the fields of Medicine and Law, we wish to make it very clear that:

We therefore present several facts to you to clarify information you have heard, seen or read; and for you to consider as you deliberate on the proposed constitution.

FACTS ABOUT KENYA AND ABORTION

These interventions are affordable. They can be implemented with available health workers and resources. Additional funding for these services will not distort the national budget all and in the immediate and long term will save us lives and money.

VOTE FOR A CONSTITUTION THAT DEFINES LIFE AS FOLLOWS;

'LIFE STARTS AT CONCEPTION AND ENDS AT NATURAL DEATH'

In the Bible, in the book of Jeremiah 1:5, God says, "Before I FORMED YOU IN YOUR MOTHERS WOMB I KNEW YOU"

WE ARE CONFIDENT THAT THE UNBORN BABIES OF KENYA CAN COUNT ON YOU CHURCHES AND BELIEVERS LEARN AND RECEIVE TRUE, SCRIPTURAL and SCIENTIFIC INFORMATION ABOUT CONCEPTION, LIFE AND ABORTION.
WE ARE EQUALLY CONFIDENT THAT AS YOU VOTE ON THE CONSTITUTION, YOU WILL GIVE THE UNBORN BABIES THEIR GOD-GIVEN RIGHT TO LIFE AND THE OPPORTUNITY TO LIVE IN KENYA.

Wednesday, 27 April 2011
Abortion is illegal in Uganda except to save the life of the woman. Nevertheless, many women obtain abortions, often under unhygienic conditions, and... Read More...
Abortion In Tanzania

Wednesday, 27 April 2011
The issue of abortion is widespread all over the world. However the level of its effect is varied in different parts of the world. In Africa... Read More...
Abortion In Kenya