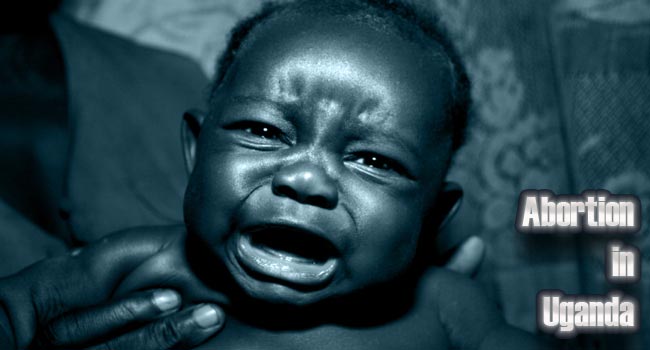 Abortion is illegal in Uganda except to save the life of the woman. Nevertheless, many women obtain abortions, often under unhygienic conditions, and the practice is quite common: about 300,000 induced abortions occur annually among Ugandan women aged 15-49 and a large proportion of these women require treatment for post-abortion complications.

The Ugandan Ministry of Health is considering the recommendations of a report it commissioned into the safety and legality of abortion. The report proposes legalizing abortion in specific cases such as rape. Illegal abortion in Uganda contributes to a high ratio of maternal mortality

In the male-dominant culture of Uganda, where men control most of the financial resources, men play a critical part in determining whether women receive a safe abortion or appropriate treatment if they experience abortion complications.

From a research carried out in the country, respondents' descriptions of men's involvement in women's abortion care agreed that men's stated attitudes about abortion often prevented women from involving them in either the abortion or post-abortion care.

Most men believe that if a woman is having an abortion, it must be because she is pregnant with another man's child, although this does not correspond with women's reasons for having an abortion. If the woman does experience post-abortion complications, the prevailing attitude among men in the sample was that they cannot support a woman in such a situation seeking care because if it had been his child, she would not have had a covert abortion.

Since money is critical to accessing appropriate care, without men's support, women seeking an abortion may not be able to access safer abortion options and if they experience complications, they may delay care-seeking or may not obtain care at all. Barriers to involving men in abortion decision-making endanger women's health and possibly their lives.

In Uganda, induced abortion is permitted only when continuation of a pregnancy would endanger a woman's life. The country's major religions too, outlaw the practice. Because of this, it is often practiced in secret, with many women having to rely on practitioners who use dangerous methods under unsanitary conditions. An estimated illegal 300,000 abortions are said to occur annually in the country. And the consequences have been deadly for many women.

The state of affairs surrounding abortion makes it difficult to get facts on the practice. However, a new study by the Guttmacher Institute "Abortion Worldwide: A Decade of Uneven Progress" offers some new data, which could have policy implications. "Surveys of knowledgeable health professionals suggest that in Uganda, 23% of women seeking abortions go to traditional practitioners, many of whom employ unsafe techniques, and 56% go to doctors or nurses, who generally provide safer services" says the study. "Some women (15%), try to self-induce using highly dangerous, crude methods which may include; drinking of turpentine, bleach, detergents or tea made with livestock manure, inserting herbal preparations into the vagina or cervix, placing foreign bodies such as sticks, coat hangers or chicken bones into the uterus and jumping from roof tops, while (7%) others purchase abortion-inducing drugs from pharmacists or other vendors.

These are said to result into complications like damage of the bladder or bowel, damage of the cervix, secondary infertility, tubal blockage, fistula, severe bleeding and sometimes death. As a solution, Ibembe says provision of high quality safe abortion services by trained service providers is crucial in reducing maternal mortality that currently stands at 435 per 100,000 live births.

The study further shows that urban women in Uganda are much more likely than rural women to use the services of doctors (42% vs. 16%). Similar results were reported in Burkina Faso and Côte d'Ivoire for this multi country study. In Uganda, just like in Cameroon, Ghana and Zambia, women cited fear of legal consequences, social stigma, high cost and lack of access to trained health professionals as important factors preventing them from obtaining safe abortions.

Further data on Uganda, the study shows, experts estimate that 50% of all women having clandestine abortions experience health complications requiring treatment. "Such complications are thought to be more common among poor women than better-off women (55 % vs. 38 %)."

The study also indicates that an estimated 45% of all women who experience complications requiring treatment do not receive medical care at a facility, and the proportion is even higher among poorer women. Data from the reproductive health division at the Ministry of Health show that abortion related complications are among the top five direct causes of maternal deaths.

However, when they make it, many women with untreated complications suffer long lasting health effects, such as anaemia, chronic pain, chronic inflammation of the reproductive tract and infertility.

With the urge to curb maternal complications and possible deaths, Ntungamo district woman MP, Beatrice Rwakimari, says much as it might be a right for a woman to abort, the right of the unborn baby should not be overlooked. She states that the right of the mother and the baby should not be compromised and emphasizes that as policy makers, focus on unwanted pregnancies should be the first step in fighting unsafe abortion.

The suggestion made is that Uganda should work on ensuring that the unmet need for contraceptive intake that stands at 41% be reduced by ensuring that more women use family planning methods to avoid unwanted pregnancies.

'Unmet need' refers to the percentage of women who would like to be able to either space their children or stop having children but are not using contraception.

Tuesday, 09 October 2012
'Women on Waves' (WoW) is an organization which was founded in 1999 by Rebecca Gomperts. After completing her training as an abortion doctor, Rebecca... Read More...
Linda Uhai Campaign: Nakuru

Monday, 30 July 2012
Linda Uhai Campaign is one of the programs being undertaken by EACLJ to explain the importance of preserving life and the fact abortion is not the... Read More...
The Issues With the New Constitution

Monday, 12 April 2010
Issue No.1: Homosexuality: There have been homosexuals among us, as our brothers, and sons, however, it is a practice frowned upon, and practiced in... Read More...
Abortion Scope Widened