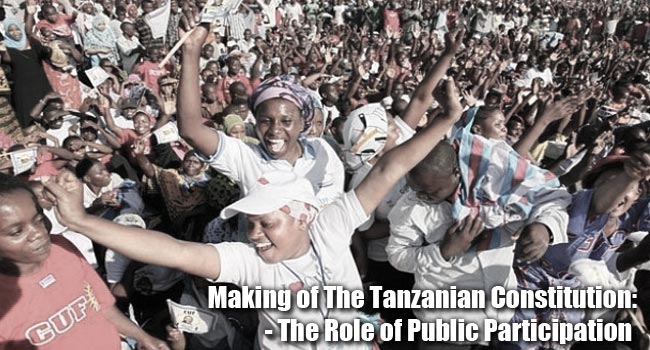 Making of the Tanzania constitution; The role of public participation.

The Constitution of a country is the most important legal document. It is the supreme law on which all other laws are based. At times it is referred to as a social contract between the rulers and the ruled. It is also the consensus amongst the people themselves. The Constitution is therefore more than just a document. It embodies the wishes and aspirations of the country. All the laws, by-laws, rules and regulations derive their legitimacy from the Constitution and thus the need for a people centered constitution, which can only be guaranteed by public participation in the constitution making process.

There is a serious need to encourage and facilitate participation of all Tanzanians in the Constitutional making process. Constitution-making must involve as many actors and stakeholders as possible. What is happening in the ongoing process in Tanzania is a sad state of affairs. The process lacks an in inbuilt mechanism that could have empowered the people through civic education programmes. Moreover, since there is no serious civic education or constitutional happening alongside the constitution-making process, the nation is far from being aware of the process. The process of the collection and of the public's views from the public lacks enthusiasm and is marked with low turn out by members of the public.

Recently, the Tanzania's Deputy Minister for Information, Culture, Youths and Sports, Mr Amos Makala urged the youth to give their views on what should be included in the constitution. We would also like add our voice and urge the entire Tanzanian population to embrace this process by coming out in large numbers and be actively involved. There is also need to ensure the involvement of civil society organizations, faith based organizations, disabled persons, women and also the minorities and marginalized groups.

A constitution is not a government project, but most important a means by which citizens can participate in determining the State's political status and its economic, social, and cultural development and thus the need for Tanzanians to take this process seriously. Their submissions may be addressed to the constitution-making body. Public participation is directed towards influencing the final outcome of the process, the constitution. The people of Tanzania have to be genuinely involved in the constitution making process to allow them to decide how they would want to be governed. This is the hallmark of democracy.

A people driven constitution will give more legitimacy to the final document. There is need to ensure that virtually every citizen is able to take part in the process. Tanzanians must take part in debates, giving views and written submissions, initial drafting, constitutional forums, national constitutional conference, The Constituent Assembly, referendum and even in the promulgation of the new Constitution. The entire constitution making process must be ingrained in public participation in all the stages. Inclusion ensures not only that individuals are physically present in the decision-making forums, but that they have an effective opportunity to influence the thinking of others.

Politicians or people with vested interests should not hijack the process. They have narrow personal or party interests, closely connected to their access to and exploitation of the state and its resources, which they try to advance or preserve through the process. They may also have an interest in stirring ethnic differences to maintain their leadership positions, regardless of the national interest, and thus their role can be deeply divisive. Since in one sense the politicians can be the principal beneficiaries of the resources of the state their influence on the making of the constitution of the state should be limited.

The process of constitution making can only claim legitimacy and credibility if the people have been meaningfully involved in each stage of the process. The population ought to understand the role they are supposed to play in the process of constitution making and get involved with zeal. We urge the people of Tanzania to take up this challenge to change the destiny of their country in this historic moment.

Saturday, 28 April 2012
Reforms in different institutions are among promises that came with the promulgation of the new constitution. With the recent report on the vetting... Read More...
A Summary of the Recently Proposed Amendments

Wednesday, 27 June 2012
By Melissa Lukulu In the wake of the ongoing amendments that have evoked mixed reactions from Kenyans, it is a noble consideration to uphold the... Read More...
National Conference on Accessibility and Disability Rights

Wednesday, 04 July 2012
By Melissa Lukulu The National Council for Persons with Disabilities (NCPWD) in collaboration with the Ministry of Gender, Children and Social... Read More...
Access to information: A tool for fighting Impunity

Saturday, 16 June 2012
By Joy Mdivo Article 35 in the Bill of Rights says every citizen has the right to access to information held by the state or any information that is... Read More...