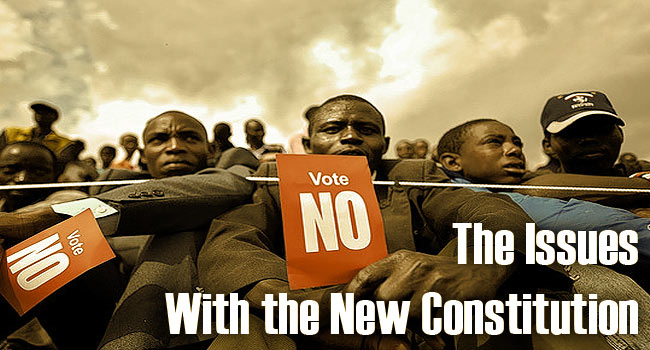 There have been homosexuals among us, as our brothers, and sons, however, it is a practice frowned upon, and practiced in secret. There are parts of the world where homosexuality is embraced, even celebrated, but in Kenya, this is still a foreign concept, and does not have acceptability among the greater majority of Kenyans. For the Constitution to be amended to expressly allow homosexuality would be unacceptable for most Kenyans. For the Constitution to be amended to remain silent or non committal on the issue means in future a simple majority of members of parliament, which could be as few as 21MPs could pass a law in support of the practice. The potential is that same sex marriages could be enacted in the same way, thereby altering the face of Kenyan Society forever.

The Constitution must clearly state that marriage is between a MAN and a WOMAN, rather than merely stating "consenting adults". This closes the door on any possibility that in future marriage laws can be changed to allow for same sex marriages. It also leaves the current state where homosexuality is not allowed to stand. If the Constitution is changed, those laws automatically inconsistent with the Constitution and are therefore null and void.

All Kenyans are subject to the Laws of the land. Each one is equally protected, and each one has equal duty to obey the State's Laws. The Kadhi's Courts introduce an extra code for our Muslim brothers and sisters to adhere to. Kadhi's Courts enforce personal law, that is to say, marriage, divorce and succession matters. Over the last ten years, new laws have come in force to protect the children of Kenya (Children's Act No.8 of 2001) It protects all children regardless of their status in life, creed , sex or circumstances of birth. This means that a child born to the President has equal rights and protection as a child born to a single mother in the slums. However, under Islamic Sharia, certain categories of children do not have any rights, for example, illegitimate children. Their fathers do not have to provide for them, or leave them an inheritance. Does that mean that children born to Muslims cannot be protected like other Kenyan children as put in the Children's Act?

On succession matters, the changes in the law allow for girls to inherit equally among their brothers. However, Muslim girls do not enjoy this privilege under Islamic Sharia. Married women can be disinherited under some circumstances in Islamic Sharia, despite the strides that women have gained under the Married Women's Property Act. One can help her husband amass so much wealth, only to end up almost destitute after a divorce, especially if she is the one who asks for the divorce. Does this mean our Muslim sisters have no right to be protected under such circumstances? The continuance of Kadhi's Courts means our Muslim brothers and sisters have no choice but to live under this yoke.

By singling out the Kadhi's Courts for Constitutional entrenchment is raising the profile of one religion over the others, which is a position subject to abuse in the future. Countries like Nigeria that have tried to enforce both Sharia and Secular law have found the harsh nature of Sharia to be inconsistent with Secular laws. As a result there has been a steady depletion of the freedoms, especially those of movement, association and speech of non Muslims in areas where Sharia has been enacted, even though they are not under Sharia.

All Kenyans can aspire to hold ANY Constitutional office in Kenya, except that of Chief Kadhi. A Kadhi is a Muslim Judge or Magistrate. The Chief Kadhi, is supposed to be a judicial officer, but he also performs religious functions, like declaring the start and end of Ramadhan. This means that non Muslim lawyers who understand Islamic law cannot hold the office of Chief Kadhi, while non Muslims are served by Muslims in secular courts. This situation is divisive and discriminatory.

We must reject any attempt to make a worthy mention of any religion in the constitution. The Mother Law must treat all equally. The Bill of Rights must be applicable to all Kenyans, regardless of tribe, sex, creed and social status in life. If we reject the draft constitution, we shall have the current constitution which still has the Kadhi's Courts in it. Currently, there are cases filed by Kenyan Bishops in the High Court and Constitutional Court. The hearing ended in February 2009. To date, judgment has not been delivered. We shall simply move forward with the court process until we force a change in our constitution to have all religions treated equally. The suggestion is that if the Kadhi's Courts are to remain, then they should be governed by an Act of Parliament, rather than the Mother Law.

The draft Constitution defines life to start at conception. However it goes on to say that a pregnancy can be terminated if a Health Care professional finds that the life or health of the mother is at stake. It also allows for the circumstances that this takes place to be left up to any other written law, an Act of Parliament. The draft Constitution states also states that sources of Kenya's laws include any international instruments (treaties and conventions of the UN, AU and any other international and regional body) The position therefore is, where as life is defined as beginning at conception, it may be terminated on the flimsiest of grounds. The position as it stands, is that if a woman presents herself at a hospital with an ectopic pregnancy, or an abortion gone very bad, or having excessive bleeding during pregnancy, the medical personnel will straight away act to terminate the pregnancy in order to save her life. Why then put the qualification of the mother's life or health being grounds of abortion? Issues of mental health are very subjective and a woman seeking elective abortion simply has to get a psychiatrist to say she cannot cope mentally with the pregnancy. It is a door that is open to mischief. International instruments can also be used to bring in the legalization of abortion. If Kenya signs some treaty that says it is a woman's right to end her pregnancy, then Kenya would be duty bound under international law to pass a law that would support this. This is the same reason why the United States of America has never signed the Kyoto Treaty. They are bad polluters, and if they sign they will be forced to make their industries to cut or shut down emissions. This would slow their economy and they cannot afford it. So even though they know it is a good treaty in essence, since it doesn't suit them, they didn't sign it. However, Kenya is a small country, and bigger countries can force Kenya's arm to agree to such treaties.

Lobby parliament, that instead of legalizing abortion, we need to improve maternal health in Kenya. More women die from complications during pregnancy and childbirth, than those who die from procuring abortions. Abortions account for only 13% of maternal deaths in Kenya. The doctors and nurses and other health care professionals even in the grass roots should be well equipped with the latest technology and medicines that will allow them to deal with medical emergencies. They should also be adequately compensated for their labour. The government, civil societies and even churches should set up crisis pregnancy centers. This will help those girls who have been thrown out of home by angry parents find shelter until they have their baby. Adoption of these babies should also be made easier and faster for other Kenyan parents who want children.

In countries that have legalized abortion, maternal death is higher by an average of 20%. Incidences of kidney complications, infertility, breast and ovarian cancer and mental health issues like depression and psychosis are on the rise. The only beneficiary is the abortionist and the fertility doctors. They make a killing and with a profit to boot. Abortion does not save life. Each abortion ends in the successful death of an individual. Sometimes, even the mothers do not make it.

Wednesday, 26 October 2011
Characteristics of Devolution Two or more levels of government established by law Coordinated yet none is subordinate to the other/ none is an agent... Read More...
Abortion In Uganda

Wednesday, 27 April 2011
Abortion is illegal in Uganda except to save the life of the woman. Nevertheless, many women obtain abortions, often under unhygienic conditions, and... Read More...
The Gender Rule Crisis

Thursday, 27 September 2012
Article 27(8) of the Constitution stipulates that the state shall take legislative measures to implement the principle that no more than two-thirds... Read More...
The County Governments