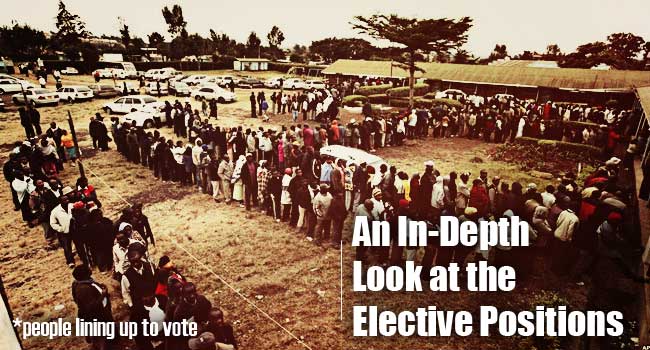 There are six elective positions that the electorate will be required to elect leaders come March 4th. This is a new phenomena introduced by the new Constitution. This article will highlight them, describing their functions and roles. They include;

The authority of the President is vested in the Constitution under Article 131. The president is the head of state and government. He is the commander in chief of the armed forces in Kenya and a national symbol of unity. The president exercises the executive authority of the Republic, with the assistance of the Deputy President and Cabinet Secretaries.
As we elect the President of this country, he or she should be a person who will;

The president sits at the cabinet, which is the executive arm of government. The cabinet comprises of the president, the deputy president and cabinet secretaries.

The Member of Parliament

It is also the mandate of National Assembly to;

A member of parliament should therefore be a person who has the interests of Kenya at heart. They should be people with good leadership, transparency and integrity. Parliament manifests the diversity of the nation and represents the will of the people. It deliberates on and resolves issues of concern to the people.

There are forty-seven counties. Each county will elect a woman representative who will also sit at the National Assembly. These women should have the interests of Kenyans at heart as the will be making laws concerning the people. They should be accountable and have good governance skills. They should be women of integrity.

Article 93(1) of the constitution establishes a Parliament of Kenya, which shall consist of the National Assembly and the Senate. The senator sits at the Senate, which is at the National Government.
Article 96 (1) provides for the role of the senate.

Functions of the county executive committees are provided for under Article 183 of the constitution. The committee shall;

These should be individuals who will be able to make good laws that will affect the people positively.
As the people of Kenya therefore, come March 4th, Let us vote in leaders who have National values and Principles of governance. They should be individuals who have good governance, integrity, transparency, accountability and sustainable development.

Wednesday, 03 August 2011
By PhoebeDisappointment... this is a word whose meaning Kenyans have in the recent past had to unwillingly bear every single day of their lives.... Read More...
More Terror Attacks and the Prevention of Terrorism Bill

Wednesday, 04 July 2012
By Melissa Lukulu Another Sunday has departed and what remains is apprehension coupled with citizens who are close to complacent to the pattern of... Read More...
Kenya is at Crossroads...

Wednesday, 03 August 2011
By Joy Mdivo Every society begins with a group of individual coming together and deciding to be organized. They decide to be bound by a certain code,... Read More...
A Summary of the Recently Proposed Amendments

Wednesday, 27 June 2012
By Melissa Lukulu In the wake of the ongoing amendments that have evoked mixed reactions from Kenyans, it is a noble consideration to uphold the... Read More...