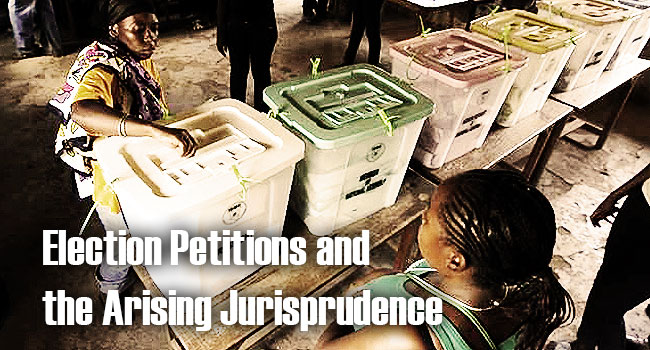 4th March 2013 marked the first General Elections exercise under a new Constitutional dispensation. It was also recorded as the biggest election as Kenyans had to elect six different individuals at once. Most election observers reported that the elections were free and fair; however there were a number of petitions filed in courts immediately after results were released.

Filing of the petitions in courts started within the 28 day period stipulated in Article 87(2) of the Constitution, which totaled to 188. As of August 20th 2013, 120 out of the 188 petitions had been finalized. Needless to say the aspect of free and fair elections has been upheld through the hearing of the electoral petitions. To aid the process Chief Justice Willy Mutunga selected 98 judges and magistrates to hear the more than 180 election dispute cases. In addition Mutunga appointed Justice David Majanja to head the ad-hoc Election Disputes Resolution Division, which would co-ordinate the process.
Article 87(1) of the Constitution states; '...Parliament shall enact legislation, to establish mechanisms for timely settling of electoral disputes.' Currently, the Constitution, Elections Act, Political Parties Act, IEBC Act, and Campaign Finance Bill ' (which is a contentious Bill that seeks to regulate campaign spending ahead of elections and referendums) all provide a legal framework for electoral dispute resolution. However, the presence of adequate legislation did not hinder problems and inefficiencies during the petition process.
A breakdown of the 188 petition reveals that 56 were members of National assembly, 7 Senators, 5 Women Representatives, 3 county Assembly Speakers and 56 County Assembly Representatives. So far 35 petitions have been struck out on technical grounds while 25 Petitions have been withdrawn, 53 are pending judgment and formal withdrawing while 58 are still pending hearing. The petitions on which judgments have been delivered have brought out similar jurisprudence from the 2007 election petitions.
Below is an analysis of few areas where the said petitions were filed.

The case in Mombasa

Mombasa Gubernatorial aspirant Suleiman Shahbal and a voter, Salim Karama moved to court to file a petition challenging the election of Ali Hassan Joho as the Mombasa County Governor, Hassan Omar as the Mombasa Senator and Badi Twalib as the Jomvu Member of the National Assembly. Joho sought to have the said petition struck out because of Suleiman's lack of compliance with the 28 day rule. Another issue which the court was faced with was when the 28 days starts being counted from.
This has been one of the most controversial election petition and most eagerly awaited judgments. Most recently it was held that Shabhal failed to prove all allegations of fraud beyond reasonable doubt and therefore Joho maintained his seat as Mombasa governor. The judge ruled that the evidence induced in Court did not satisfy that alleged malpractices affected the outcome of the election hence the election was fair. This is after a back and forth of claims ranging from death threats to bribery and most interestingly it was claimed that Joho did not have legitimate degree papers. It is unpredictable whether or not the petitioner will use his right to appeal.

The Situation in Siaya County

Siaya Governor Cornel Rasanga has lost his seat after the High Court in Kisumu nullified his win, citing massive electoral malpractices.
Rasanga was the first Governor to lose his seat following an election petition that had been filed by William Oduol, who lost in the March 4 elections. While declaring the same, Justice Aggrey Mchelule declared a by election, meaning that the people of Siaya will be going back to the polls soon.

The High Court dismissed the petition filed against Makau who won the Parliamentary seat for Mavoko. Petitioners had cited several election Malpractices which included vote buying, bribery and failure by their agents to sign forms 35 that had occurred during the election however the petitioners failed to prove the same beyond reasonable doubt. Judge Lillian Mutende held that it the burden of proof of all claims by petitioners squarely lay on their hands and that of their agents through their testimonial evidences.
In the said case there was also the issue of unqualified Advocates acting on behalf of clients which was also similar in other election petition cases that were conducted in Kisii and Nyeri Counties. In the Mavoko case the Judge held that unqualified Advocates acting was in contempt of court and sought that the Law Society of Kenya take disciplinary action as the said individuals wasted the time of the court and acted in a manner that was an abuse of the court process. In Kisii County a petition was struck out because at the time of filing the advocate had not renewed his practicing certificate.
All the acts stated are contrary to the provisions of the Advocates Act Cap 16 of the laws of Kenya.

The petition process has not been spared by challenges, they include;

Needless to say this has been a prominent issue in most of the election petitions that were filed after this round of elections. Petitioners have had some of their cases dismissed due to negligent acts from their advocates. The acts ranged from being inadequate to act and they were in contravention with the advocates Act cap.16 of the Laws of Kenya specifically section 31 and section 34 of the Advocates Act which deal with unqualified persons not to act as an advocate and unqualified person not to prepare certain documents or instruments. The said happened in Nyeri where one petition was thrown out on the grounds that at the time of filing of the petition by the advocate, he did not have his practicing certificate therefore qualifying him as being inadequate to act as provided for in section 31 of the Advocates Act. As the advocate acting on behalf of the petitioner did not have his practicing certificate at the time of filing the petition on April 9th but acquired them later on July 1st 2013.
Similarly in Mavoko one of the Advocates acting had not renewed is practicing certificate. It was recently stated by the Secretary of the Law Society of Kenya, Apollo Mboya that they were waiting for the end of the election petitions in October to determine how many advocates will be facing disciplinary measures in regard to their misconduct in regard to election petitions.

As stated earlier there were judges appointed by Chief Justice Willy Mutunga to deal with the over 180 election petitions. However there arose the issue of shortage of judges or judicial officers to deal with the cases especially in Mombasa where only two judges remained after previous judges who were stationed in Mombasa for some reason were no longer able to handle election petitions within the area.

Inconsistencies between the IEBC Act, the Constitution and the Election Act (issues of filing out of time)

There were several cases of interpretation that brought about a lot of controversy especially in regard to the Mombasa governor petition. Specifically reference was made to Article 87(2) of the constitution as read with section 76 of the IEBC Act there is a clear conflict of laws and Judges have held specifically in the case of Mombasa that petitioners cannot be punished for the conflict of laws that exists in the two pieces of legislation. I would however assume that in cases where there conflict between two pieces of legislation and where one is the constitution that automatically the constitution will always take precedent over the Act which in this case is the IEBC Act and Election Act. The golden rule is that the constitution being the supreme law of the land will always take precedence over the said act.
The key issue that arose in regards to the said case in Mombasa was in relation to interpretation of the constitution particularly Article 87(1) which lays down a specific timeline for which an individual is meant to file an election petition. In this particular election petition it was claimed that Shahbal filed his election petition 34 days after the General Election which is out of the time stipulated in Article 87(2) of the constitution. This was however thrown out by The appellate court consisting of three judges dismissed Joho's submission and ruled that Shahbal had filed his petition within the time set by section 76 of the Election Act that is in harmony with Article 87. This brings me to the issue of reading or rather interpreting Article 87(2) of the constitution as read with Article 76 of the Elections Act which in regard to presentation of petitions states that

Another issue which the court was faced with was when the 28 days starts being counted from. The case has however not been finalized and it will be interesting to see what determination will be made by the court.

The burden of proving that a person is guilty of an election offence is on the petitioner and his witnesses. That burden cannot be shifted to the Respondents to establish that they did not commit such offences or malpractices.
In regards to the issue of Burden of proof, I refer to the celebrated case of Hon. Joel Onyancha which dealt with the issue of bribery. In the said case it was stated that "clear and unequivocal proof is required to prove an allegation of bribery. Mere suspicion is not sufficient. It is true that it is not easy to prove bribery especially when it's done in secrecy. In such cases perhaps bribery may be inferred from some peculiar aspects of a case..."
"A high degree of proof is required where vote buying and bribery allegations are concerned. The petitioners failed to do so in this case", observed the judge in the Mavoko case.
It is an issue that arose in almost if not all election petitions as petitioners were placed with the burden to prove that election malpractices occurred.

Lack of Adherence to Election Act

This particularly refers to the time limit that has been set in the Election Act. Electoral disputes should be concluded within six months of being filed, pursuant to Section 75 of the Elections Act. So far there are by elections that have been set to be held on the 17th of October which is past the 6 month limit set out in the Election Act. This brings out the issue of the efficiency of the judiciary. The judiciary should strive to deliver timely judgments that adhere to the rules of Natural Justice which are equity and fairness.
This lack of adherence could render the said by-elections illegal and contrary to law as they are acting outside the time limits that have been issued by Law.

Wednesday, 10 October 2012
The President has declined to sign in the controversial Finance 2012 bill. He termed it as unconstitutional and unaffordable. What President Kibaki... Read More...
Election Offences

Tuesday, 19 February 2013
As we near the General Elections, it is important for every citizen and voter to recognize and understand the election offenses to shun and condemn... Read More...
The Court of Appeal Ruling on the Election Date

Wednesday, 08 August 2012
Last week Tuesday, the Court of Appeal upheld a lower court's decision to set the date of the upcoming general elections to be on 4th March 2013. The... Read More...