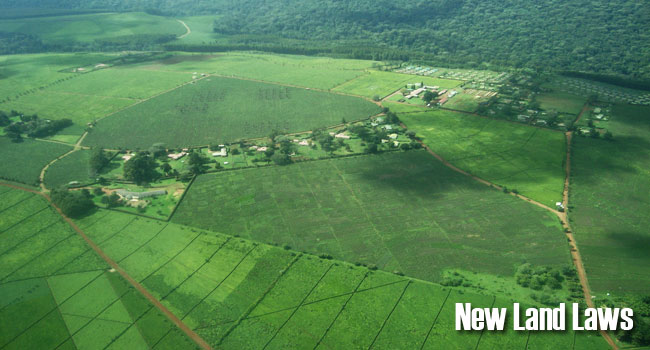 One of the contentious issues in the 2010 Constitution debate was Land. With the implementation of Constitution, several laws have been enacted in parliament and among them are the new land laws; the National Land Commission Act (Act No.5 of 2012), the Land Act (Act No.6 of 2012) and the Land Registration Act (Act no. 3 of 2012)

The main challenge posed by the enactment of the new laws is the issue of the form of new documents or instruments. Section 107 of the Land Registration Act (hereinafter "LRA") provides that the instruments previously used for dispositions of interests in land shall continue to be used and the laws applicable continue to be applied until the cabinet secretary makes the regulations contemplated under Section 110 of the LRA. This position is reiterated in the practice instructions issued by the Commissioner of lands. On the other hand, Section 109 of the LRA as read together with the schedule repeals all the laws referred to under Section 107 as previously applicable. This points out to a glaring lack of clarity in the transitional provisions of the new laws and creates uncertainties that have not been cured by the practice instructions. It is important to note that there is neither any provision suspending the repeal of any specific provisions of the laws repealed or saving the operation of some provisions or schedules or regulations made under the former laws. These gaps and the resultant uncertainties will cause substantial delays in land transactions.

The practice instructions also highlight the provisions of section 108 as regards the form of documents to be used before the cabinet secretary makes the regulations under Section 110 LRA. This section has permitted practitioners to make relevant alterations, adaptations, qualifications and exceptions to bring their documents in conformity with the new land laws. However the altering, adapting and qualifying of documents to bring them into conformity with the new laws is likely to cause inconsistencies in the practical application of the law. The practice instruction illustrates the format the documents should take during the transitional period; this raises the question as to whether the format in the instruction should be made available to all practitioners. However, best remedy would be therefore for the minister concerned to come up with the contemplated regulations, notices, forms and notifications.

Another challenge posed by the new land laws regards the titles kept under the repealed GLA or LTA. Title deeds issued under the GLA an LTA will have to be examined and registered afresh under the new laws. This process of examination and registration is outlined under section 105(c) of the LRA. Section 107 on the other hand extends the use of the instruments previously used for dispositions in land under these two Acts. The LRA however does not provide for clear timelines for the examination and fresh registration. The new law leaves undefined the processes and timelines for approval by the government survey department and is silent on whether holders of titles deeds issued under the GLA or LTA are allowed to transact with their titles pending their examination and fresh registration. This is still unclear and will certainly delay any ongoing transactions relating to land held under such title deeds.

The issue of execution and attestation of documents is also key as provided for under sections 44 and 45 of the LRA. The final instructions from the Ministry as regards transitioning from the old regime to the new dispensation clearly points out that both section 44 and 45 do not recognize execution of documents before an Advocate in respect to individual's transactions. The instructions however advice that there is need to ensure that all documents presented for registration are attested to by an advocate of the High Court of Kenya, Magistrate, Judge or Notary Public. Even though it seems proper to ensure that documents or instruments are attested to by an advocate, this attempt to introduce the concept through the practice instructions can be seen as an attempt to amend legislation.

Finally, the uncertainties regarding the process of geo-referencing especially in regard to long term leases are not clearly addressed. The instructions only points out the provisions of Section 107 LRA to the effect that leases of on going projects to be registered without geo-referencing when the new provisions will be fully operational still remains unknown.

Thursday, 26 February 2015
Devolution was and still is a very exciting idea to many Kenyans, especially since it is an assurance of their participation in governance through... Read More...
The Maputo Protocol in line with the New Constitution

Thursday, 08 December 2011
The title of the protocol is Protocol to the African Charter on Human and Peoples' Rights on the Rights of Women in Africa, the name Maputo came... Read More...
Access to information: A tool for fighting Impunity

Saturday, 16 June 2012
By Joy Mdivo Article 35 in the Bill of Rights says every citizen has the right to access to information held by the state or any information that is... Read More...
Making of the Tanzania constitution; The role of public participation

Thursday, 04 October 2012
Making of the Tanzania constitution; The role of public participation. The Constitution of a country is the most important legal document. It is the... Read More...