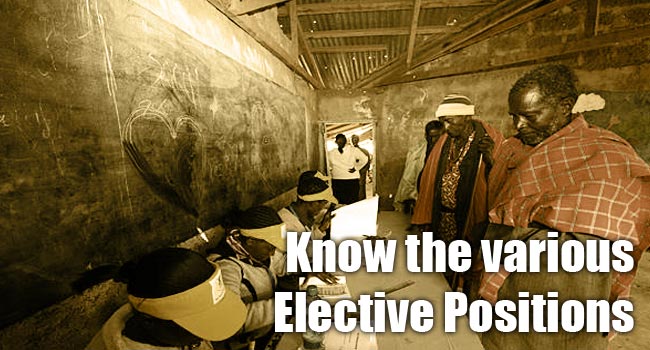 The Constitution of Kenya 2010 establishes two levels of Government:

Each of these levels is charged with specific responsibilities. Each level is also provided with public institutions that will enable it to perform its functions.

There are six elective positions:

The President and the Deputy President will head the elective positions at the National Government level.

A candidate only wins the Presidential Election if he/she receives:

In case no candidate is elected, a fresh election between the two top candidates will be held within the next thirty days. This second round of elections is referred to as the run-off election. The candidate who receives the most votes in the fresh election will then get declared as President within seven days.

Tuesday, 20 November 2012
With the arrival of the Biometric Voter Registration Kits, a 30-day voter registration kicked off countrywide on Monday. The Independent Electoral... Read More...
Politics and Bad Marriages

Tuesday, 27 November 2012
By Mwana Falsafa Politics and Bad Marriages: Why You Need To Vote Wisely. If you have lived long enough, you most likely have seen it. A lovely... Read More...
Be Reconciled With God and With One Another

Wednesday, 08 June 2011
"We are ambassadors for Christ; it is as though God were urging you through us, and in the name of Christ we appeal to you to be reconciled to God"... Read More...
Is “safe abortion” a solution to reducing maternal mortality?

Monday, 08 July 2013
On 18th and 19th June 2013, a regional meeting for Health Ministers was hosted in Nairobi, Kenya. Among the countries represented include Kenya,... Read More...