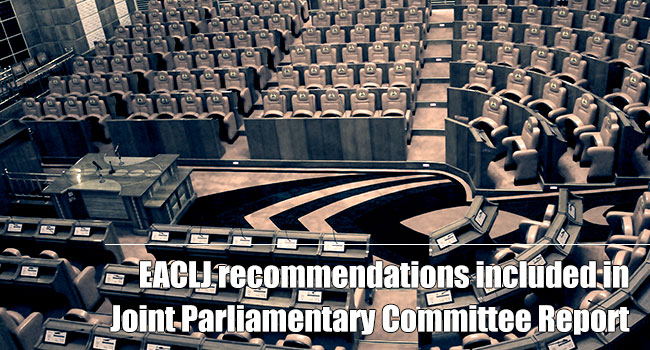 In the mid-morning hours of 27th July, 2016 Murimi Karani of the East Africa Center for Law and justice made a presentation to the Joint Parliamentary Select Committee mandated to deal with matters relating to the Independent Electoral and Boundaries Commission. The presentation was based on the two distinct memoranda prepared by EACLJ providing recommendations on legal, policy and institutional reforms to strengthen the Independent Electoral and Boundaries Commission in a bid to ensure the August, 2017 elections are free and fair and are administered in an impartial, efficient, simple, accurate, verifiable, secure, accountable and transparent manner.
About three weeks later and the committee has finalized its report in consideration of the views aired by various groups and individuals before it. We are happy to report that some of our key proponents have been included in the report; they include

The Court of Appeal Ruling on the Election Date

Wednesday, 08 August 2012
Last week Tuesday, the Court of Appeal upheld a lower court's decision to set the date of the upcoming general elections to be on 4th March 2013. The... Read More...
Voter Registration Begins

Friday, 18 January 2013
With only 50 days to go before the general elections are conducted, the aspiring leaders are anxious to overthrow their opponents and as it seems,... Read More...
We Can Have A Bright Future

Friday, 19 October 2012
By Mwana Falsafa A recent report by Forbes magazine revealed that the richest man who ever lived, was an ancient African King. Mansa Musa I of Mali... Read More...