A Revision of the Kenyan Electoral Laws 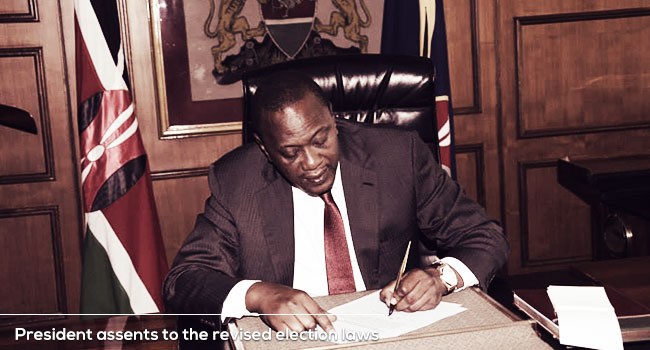 The President has assented to the Election Laws (Amendment) Act, an array of various amendments to the existing electoral laws in preparation of the forthcoming general elections slated for 8th August this year.

Key in the electoral reforms is the need to integrate a manual back-up mechanism of voter identification. The manual back up plays a complementary role to the already existing electronic voter system.

Amongst the reasons advanced for the dual system was the need for the Independent Electoral and Boundaries Commission (IEBC) to have a manual back-up in the event that the electronic system registers failure. Second is the need to combat possible breach including hacking, thus safeguard the elections from being compromised. The manual system will also identify voters and transmit results.

The new law provides that the Commission shall put in place a complementary mechanism for identification and transmission of results that is simple, accurate, verifiable, secure, accountable and transparent to ensure it complies with the provisions of Article 38 of the Constitution. Article 38 of the Constitution guarantees citizens the right to free and fair elections based on universal suffrage and the free will of the electors.

It should be noted that the amendment does not mean the country will employ a manual voting and tallying system but the system will be resorted to in the event of failure of the electronic system.

Other amendments passed include the suspending the Election Campaign Finance Act, which required candidates and political parties to submit their finance details to the electoral commission within a set deadline. Finally in addition to creating equity and giving minorities an opportunity in Parliament, those aspiring to be Members of Parliament will no longer be required to hold a university degree to vie for political office in 2017 polls.