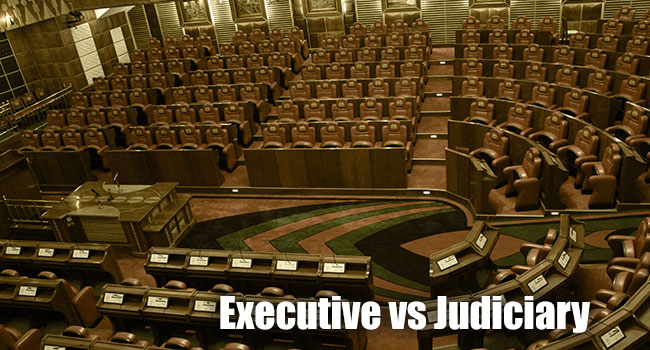 The recent tussle between the executive and the judiciary has once again brought up the question on the supremacy of the organs.
The National Assembly had forwarded a petition to President Uhuru Kenyatta requesting him to suspend six members of the Judicial Service Commission (JSC) and institute a Tribunal that would investigate their conduct. The Commissioners who include Ahmednassir Abdulahi, Reverend Samuel Kobia, Emily Ominde , Hon. Justice Mohamed Prof. Christine Mango Warsame, and Florence Mwangangi had been accused of financial interference and obstructions of justice. The Commissioners were since suspended by the president and a Tribunal formed to investigate their conduct in accordance with the National Assembly.
According to Article 251 of the Constitution violation of the Constitution and gross misconduct, among others, are listed as sufficient ground for the removal of a Commissioner from office. The same Article provides that the National Assembly shall receive any petition for the removal of a Commissioner from office and forward the same to the President if it discloses sufficient grounds for such removal. On receiving such a petition the President may suspend the member or office holder pending outcome of the complaint; and shall appoint a tribunal to investigate the same. The findings of such a tribunal are binding upon the President as he is required to act in accordance with its recommendations within thirty days.

However, The National Assembly recommendations were conversely defiant of High Court orders that were issued to block the Parliament from debating or initiating the removal of the six JSC members. Another order had been issued previously to preclude the Parliamentary Committee on the Administration of Justice from tabling its report on the six JSC members to Parliament.
As a result the JSC made an application to court to challenge the legality of the President's decision. Upon hearing the application, the High Court reinstated the Commissioners and suspended the Tribunal, taking cognizance that the suspension of the Commissioners would interfere with the smooth administration of Justice. The Court deemed the President's actions null and of no effect as they were in violation of court orders.
Article 171 of the Constitution establishes the Judicial Service Commission and mandates it to promote and facilitate the independence and accountability of the judiciary and the efficient, effective and transparent administration of justice. The Commission is tasked with the recruitment of judges and disciplining of Judiciary staff. Suspension of the six members meant that the JSC would function with only five members which is less than the required number to form quorum. The opponents of the move by the President had warned that lack of quorum would interfere with the efficient and effective functioning of the JSC; which would in turn slow down judicial reforms.
A careful balance has to be enhanced between the Judiciary, Executive and the Legislature to ensure that the three arms execute their functions effectively and accountably without either overstepping the other in the conduct of their functions. The principle of Separation of Power of the Judiciary, Legislature and Executive needs to be upheld.

Wednesday, 07 March 2012
Kenya has been given a three-month ultimatum by the U.S to enact proper laws that will help in the fight against terrorism. Specifically, the U.S... Read More...
How to Register Patents in Kenya

Thursday, 10 November 2011
Grant of Patent in Kenya Patents are granted for inventions that are new, non-obvious and that can be used in any kind of industry. 1.0 Requirements... Read More...
Judicial vs Constitutional Supremacy

Wednesday, 07 November 2012
Following a public outcry against the alarming rate of impunity within our country's Judicial system, the Judges and Magistrates Vetting Board (JMVB)... Read More...
The National Intelligence Service bill (2011)

Thursday, 16 August 2012
The National Intelligence Service bill, 2011 seeks to operationalize articles 239 and 242 of the Constitution which establishes the National... Read More...