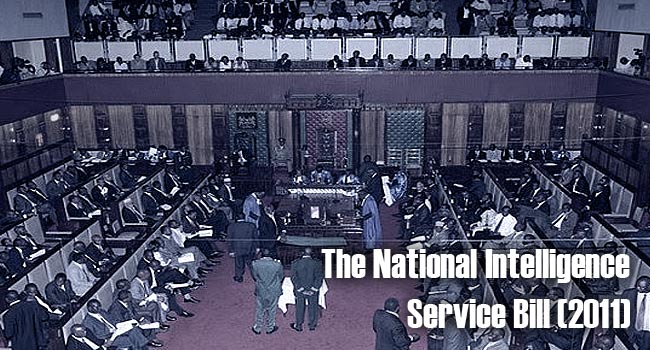 The bill lays a framework for the maintenance of professionalism and adherence to the principles of leadership and integrity by mandating the Director General to issue and maintain both a disciplinary code for the service and a code of conduct and ethics for officers of the service which codes must specifically prescribe for professional conduct, political neutrality, conflict of interest, conduct of private affairs, dealings with foreigners and submission of declarations.

However, the consequences of misconduct are grave and should be handled by an independent body to avoid abuse of this punishment. The meting and disciplinary procedure can be handled by the Complaints Commission and not the Director General. This will safeguard the process of from being abused.

Clause 20 of the bill expressly prohibits officers of the service from subjecting any person to torture or to any other cruel and inhuman or degrading treatment. This provision is aimed at protecting the right to freedom and security of the person as established under article 29 of the Constitution. It is important to note that under article 25 of the Constitution the fundamental right and freedom from torture and cruel, inhuman or degrading treatment or punishment can not be limited. The National Intelligence Service bill therefore seeks to ensure that the officers of the service do not violate the Constitution.

The bill further lays a framework for upholding the right to privacy by providing the procedure under which officers can enter and conduct searches in any private premises or seize any material or monitor communication. Under Clause 31, the Director General may make an ex-parte application for a warrant to a judge of the High Court where it is necessary to investigate any threat to national security.

The National Security Council, as established under article 240 of the Constitution, shall exercise supervisory control over the service. The bill also establishes the National Intelligence Council whose function is to advise the service on matters touching on national security and intelligence policies, administration and expenditure of the service. The membership of this council includes the Attorney General but excludes the Director of Public Prosecutions.

The final oversight organ of the service is the Complaints Commission as established under clause 34 of the bill. The commission consists of members appointed by the President on the recommendation of the Judicial Service Commission. The power of the Judicial Service Commission, a judicial organ, to recommend members to the Complaints Commission as provided for under the bill seems to offend the principle of separation of powers since the National Intelligence service falls within the ambit of the executive arm of government. This role should be performed by the National Intelligence Council.

Clause 39 which provides for destruction of classified information and records. This can be abused to conceal records that are of scandalous nature. It is only fair and just that an Intelligence Service retains classified information and records which can be de-classified at some point in future when circumstances so dictate or a time line be provided of after how long the records can be destroyed. It is also in conflict with article 35 of the constitution.

The bill has captured most of the requirements laid down under the Constitution especially with regard to the bill of rights; however it seems not to take cognizance of the devolution structures as contemplated under the Constitution. It goes without saying that the County governments will definitely need the services of this important security organ hence the need to have county intelligence divisions.

Tuesday, 19 February 2013
As we near the General Elections, it is important for every citizen and voter to recognize and understand the election offenses to shun and condemn... Read More...
How to Register Patents in Kenya

Thursday, 10 November 2011
Grant of Patent in Kenya Patents are granted for inventions that are new, non-obvious and that can be used in any kind of industry. 1.0 Requirements... Read More...
Law Against Torture

Thursday, 13 June 2013
The UN Committee Against Torture has urged Kenya to enact a 'Prevention of Torture Bill' to render all acts of torture punishable. It has termed it... Read More...
Executive vs Judiciary

Sunday, 08 December 2013
The recent tussle between the executive and the judiciary has once again brought up the question on the supremacy of the organs.The National Assembly... Read More...