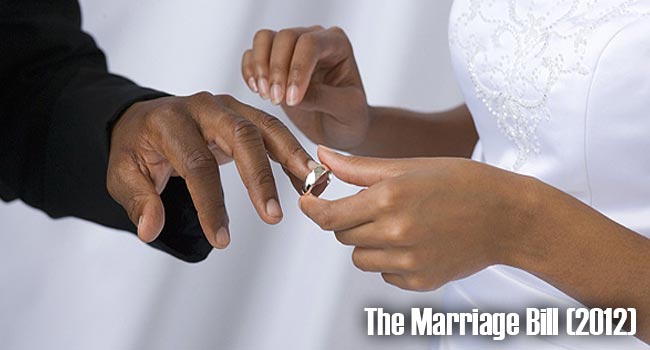 The Marriage Bill is currently undergoing internal review and stakeholder consultation. It is a Bill for an Act of Parliament that is meant to amend and consolidate the various laws relating to marriage and divorce and for connected purpose. Since the 21st of August 2012, the Commission for the Implementation of the Constitution (CIC) has been holding a plenary to deliberate on the Family Law Bills. The Plenary is amongst the final stages of deliberations before the bills are transmitted to the Attorney General for publication. This follows the incorporation into the bills the views expressed by the participants at various forums as well as those received in writing.

Among the key laws that the Commission for the Implementation of the Constitution, CIC received following the swearing in of Commissioners in January 2011 was the Family Law Bills (The Marriage Bill, The Matrimonial Property Bill and The Protection against Domestic Violence Bill). The Family Law Bills give effect to Article 45 of the Constitution which provides for family.

In the review process, CIC has facilitated stakeholder participation through technical and stakeholder forums, public forums in different counties and more recently a meeting with religious leaders and community elders to discuss the provisions on the Family Law Bills. The meeting brought together community elders from the Maasai, Gusii, Pokot, Ogiek and Kuria Communities as well as religious leaders from various denominations within the Christian Faith, Muslim, Hindu and Baha'i religious groups.

Among the key provisions that formed the basis for discussion in the various forums included but not limited to:

It is our responsibility to ensure that social stability as well as economic development is protected by ensuring that the legislation passed promotes families as the building blocks of Kenyan society. This will promote democracy and good governance.

Analysis of the Leadership and Integrity Bill

Tuesday, 11 September 2012
Chapter Six of the constitution endeavors to uphold and restore the rule of law in Kenya by providing guidelines that govern on leadership and... Read More...
The Controversy Surrounding the County Allocation of Revenue Act

Monday, 09 September 2013
President Uhuru Kenyatta's Assent of the County Allocation of Revenue Bill was the first step in setting the stage for County Governments to receive... Read More...
Election Offences

Tuesday, 19 February 2013
As we near the General Elections, it is important for every citizen and voter to recognize and understand the election offenses to shun and condemn... Read More...
The V.A.T Bill 2013