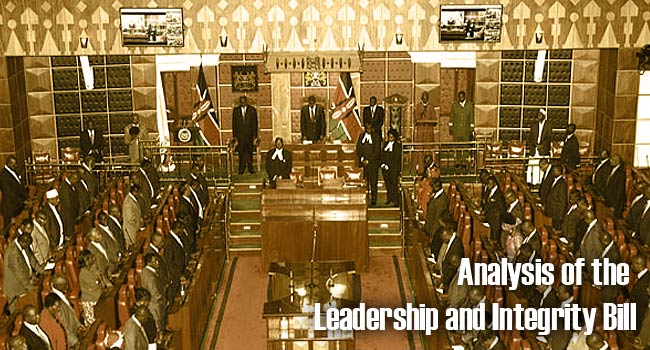 Chapter Six of the constitution endeavors to uphold and restore the rule of law in Kenya by providing guidelines that govern on leadership and integrity.

With the existing political climate and the much-anticipated general elections, the need to establish scales that will weigh the efficacy and credibility of the future and the incumbent leaders of our nation cannot be evaded. Kenyans needs to have confidence in the constitutional offices. The Constitution dedicates a whole chapter to making provisions that will ensure an effective administration that cuts across all leadership ranks.

Under chapter six of the constitution, article 73 advocates for a leadership that upholds personal integrity, objectivity and impartiality; a leadership that is selfless, promotes public integrity and supports the spirit of the Law. Further to this, Article 75 clearly affirms that whether in public places, official places, in private or in association with other persons, a state officer shall behave in a manner that avoids demeaning the office he or she holds. Article 79 stipulates that Parliament shall enact legislation to establish an independent ethics and anti-corruption commission, which shall be and have the status and powers of a commission under Chapter Fifteen, for purposes of ensuring compliance with, and enforcement of, the provisions of this Chapter.

The Leadership and Integrity bill was and still is supposed to give legislative weight to chapter 6 of the constitution. Article 80 requires the Parliament to enact legislation that will give effect to, and establish procedures and mechanisms for the effective administration of this Chapter. This is for the purpose of promoting ethics, integrity and servant leadership among State officers; providing for the extension of the application of certain provisions of Chapter Six of the Constitution and the Act to public officers.

Under the Constitution (Article 260), a "state officer" means a person holding a state office. A "public office" means an office in the national government, a county government or the public service, if the remuneration and benefits of the office are payable directly from the Consolidated Fund or directly out of money provided by Parliament; "public service" means the collectivity of all individuals, other than State officers, performing a function within a State organ. The word "State" connotes offices, organs and other entities comprising the government of the Republic.

In commending the positive spirit behind the drafting of the Bill, several concerns were raised. Once the Bill was tabled in Parliament, major changes were made on the document which would better be referred to as mutilations. The gist of the document was 'watered down' to a rather lenient manual that could be manipulated to allow unscrupulous state officers retain their leadership positions.

It is unfortunate that after the extensive whistle blowing that was carried out concerning the defective Leadership and Integrity Bill 2012, the Legislators gave a cold shoulder to the Bill initially drafted by the Commission for the Implementation of the Constitution (CIC).

Below are the changes that have since been experienced and assented in the new document:

Even after promulgation of the new Constitution, it is evident that the mechanisms that were intended to bring about accountability and transparency across all institutions are being frustrated.

It is a sad reality that the very legislators expected to steer our nation into realizing the constitutional principles set out in Article 10, are retrogressing the process.

It is however not an irreversible tragedy as the ultimate power rests in the hands of Kenyans through their vote.

One-third, two-thirds what is the difference?

Wednesday, 13 July 2011
By Joy Mdivo I have had a very interesting and eye opening experience today. In Kenya, there is the case currently in Court about the nominations to... Read More...
EALA seeks to transfer Hague Cases to Arusha

Monday, 11 June 2012
The East Africa Legislative Assembly recently passed a resolution to have the Ministers of the EALA institute proceedings that would have the trial... Read More...
High Court Rules on New Security Bill

Tuesday, 24 February 2015
The High Court of Kenya ruled on monday that several sections of the Security Laws (amendment) Act 2014 were unconstitutional. President Uhuru... Read More...
The AU, ICC and Kenya

Dr. John Pombe Magufuli has been voted in as Tanzania's new President. The win means that Tanzania's ruling party Chama Cha Mapinduzi (CCM) maintains its half a century long grip...

Potential Constitutional Crisis Due To a…

Article 27 of the Constitution of Kenya 2010 recognizes that every person is equal before the law and has the right to equal protection and equal benefit of the law....