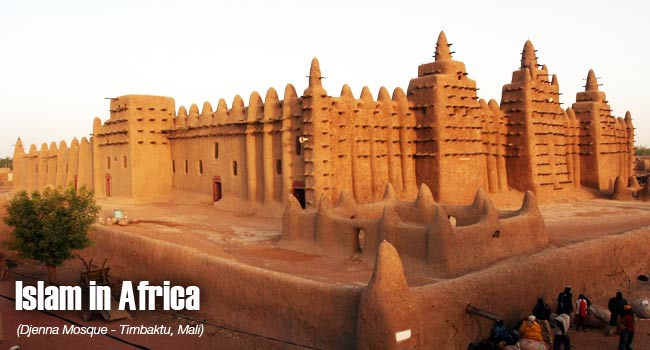 Islam in Africa, the development of the Muslim religion on the African continent.

During Muhammad's lifetime a group of Muslims escaped Meccan persecution (615) by fleeing to Ethiopia, where the Negus gave them protection. The spread of Islam in Africa began in the 7th and 8th cent. with the Umayyads, who brought the religion to the Middle East and to the littoral of North Africa. Along the coast of Africa Islam spread among the Berbers, who joined the Muslim community and almost immediately drove north across the Mediterranean into Europe. In Morocco, Muslims founded the city of Fès (808), which soon thereafter gave refuge to Andalusian Muslims fleeing an uprising in Córdoba. On the east coast of Africa, where Arab mariners had for many years journeyed to trade, Arabs founded permanent colonies on the offshore islands, especially on Zanzibar, in the 9th and 10th cent. From there Arab trade routes into the interior of Africa helped the slow acceptance of Islam and led to the development of Swahili culture and language.

Prior to the 19th cent. the greatest gains made by Islam were in the lands immediately south of the Sahara. The Islamization of W Africa began when the ancient kingdom of Ghana (c.990) extended itself into the Sahara and the Islamic center at Sanhajah. Mansa Musa (1307–32) of Mali was among the first to make Islam the state religion. By the 16th cent. the empire of Mali and its successor-state Songhaj included several Saharan centers of trade and Muslim learning, such as Timbuktu. In the region of the E Sudan, Islamic penetration followed the route of the Nile. By about 1366, Makurra, the more northerly of the two Christian kingdoms of the E Sudan, became Islamic. The other kingdom, Aloa, was captured (c.1504) by the Muslims.

In the 16th cent. the Somali conqueror Ahmad Gran unsuccessfully attempted to convert Ethiopia to Islam. In the late 18th and early 19th cent., Africa, like the rest of the Muslim world, was swept by a wave of religious reform. Militant reformers, such as the Fulani and the followers of Hajj Omar, greatly extended the area over which Islam held sway in W Africa. Usumanu dan Fodio (1809) founded the Sokoto caliphate, which was eventually incorporated under British rule into Nigeria.

The Muslim brotherhoods also gained many new converts. European colonialists in many cases adopted Muslim law as a unifying administrative structure, rather than the indigenous and often competing tribal customs of their artificially demarcated colonies. Islam in Africa has to varying degrees incorporated tribal and pre-Islamic practices, and the Muslims of Africa have accepted claims of several self-proclaimed Mahdis. In the 20th cent. Islam has gained more converts in Africa than has Christianity, which labors under the burden of identification with European imperialism.

Why the Church Feels Discriminated Against in Marriage Licensing

Friday, 24 October 2014
The recent directive by the Attorney General's office that Church ministers must apply for new licenses to conduct marriages under the new Marriage... Read More...
The Constitution Review

Monday, 12 April 2010
Why is a National Constitution important? The Constitution is the most important governance tool in any country since it is the mother law upon which... Read More...
Religious Persecution in Tanzania

Tuesday, 10 April 2012
By EACLJ StaffIt has now become commonplace for politicians to make deals with religious groups in the run up to elections. During the recent cabinet... Read More...