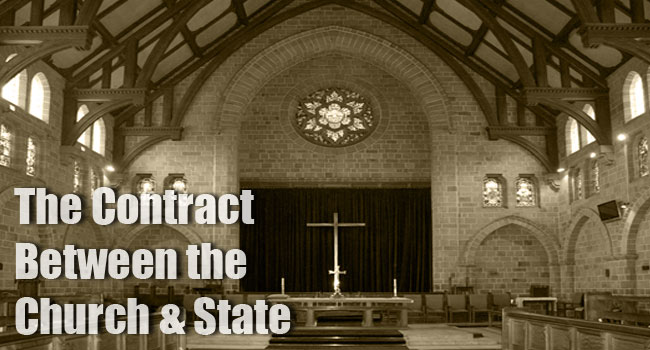 Under an assumed Constitutional contract, the State is given a monopoly on the use of violence. This monopoly is on the condition that the State provides security as well as protects the citizens from aggression, regardless of whether it is from within or without. A further assumption under Democracies based on the nation State model, is that the State will provide economic stability, food at reasonable prices, roads, hospitals, schools and everything that appertains to healthy and safe living to its citizens, including security. The Kenyan State has failed in its duty to provide security to its citizens, more specific, Christians. There may be a number of reasons for this. However, none of these matter because if a contracting party fails to discharge its obligations, the parties should be free to re-negotiate.

We witnessed the murder in cold blood of Bishop Segel shot in the Church compound as his wife and others watched. Later there was the grenade attack at the meeting at Uhuru Park during the Referendum campaign period. There was the attack at the open air Church meetings in Mtwapa and Tononoka. Recently there is the grenade attack in a church in Ngara, while people prayed they were bombed and blown up. The latest is the lynching of two Pastors in Mombasa who were on ministry duties, on the pretext that they were robbers. In all these cases, we have seen no one brought to book. Investigations continue endlessly and the progress, if any, is kept a tight lipped secret. Two incidents of tourists being attacked and kidnapped at the Coast caused Kenya to invade Somalia. No tourists have been attacked since. Yet here at home, taxpaying citizens, have been given no option. Going to Church or to a Church gathering has literally become a life threatening situation.

Maybe the Church is to read the sign of the times. Is the writing on the wall? Is the Government trying to pass the Church a non-verbal message? Are the attacks, repeated in almost the same pattern over and over and over again mean we do not have sufficient intelligence or personnel to stop these attacks? Why are such things as grenades still in the hands of normal civilians, why have they not mounted an operation to mop them all up and prosecute those who are found even with spent shells?

The Church must engage the State organs in order to determine the fresh terms of the social contract to come into force between them. The current contract is not working for the Church, and something has got to give. Shall it be the withdrawal of Church participation in state functions? Or shall the Church stop remitting taxes until something is done? Shall the Church pray adverse for the State Leadership calling fire and brimstone on them? Or shall the State allow the Church to employ Marshalls to come to our sanctuaries with weapons to protect the worshippers whilst in Churches and in open air meetings? This is an election year, maybe time has come for the Church to vote with its feet, and not give the current Government another mandate to demonstrate callousness and indifference.

Remember, if a shepherd is asleep and the wolves are wreaking havoc with the sheep, the sheep owner is fully justified in sacking the shepherds without notice. The State owes the Church not only press conference assurances by the Minister and the Commissioner of Police, but action to demonstrate, that Church is not a "soft spot" for young yellow bellied terrorists to come and do trial runs, sharpening their skills as they wait to do some real damage.

Monday, 30 June 2014
Meriam Ibrahim and her family are currently at the United States Embassy in Khartoum according to various media reports. The 27 year old along with... Read More...
Kenya to Join the Organisation of Islamic Cooperation

Thursday, 03 June 2010
The following is a statement by the late Ayatollah Khomeini about the goals of Islam. Islam makes it incumbent on all adult males, provided they are... Read More...