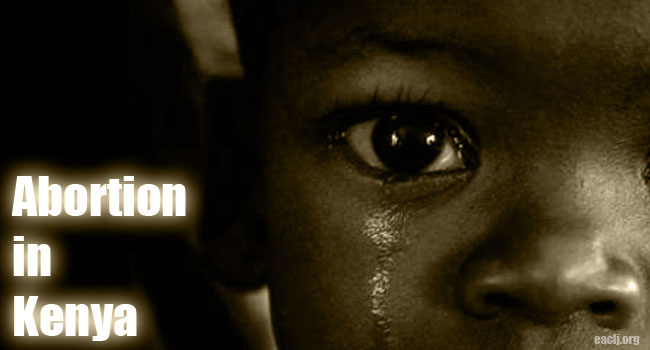 Abortion is recognized as an emotive, sensitive and even divisive issue all around the world. The case is no different here in Kenya. This was really brought to light during last year's referendum for a new constitution where the church, who were at the forefront of the NO Campaign, wanted a strong anti-abortion law included while at the same time there was a strong pro-abortion wave that stood against the Church's stand.

But before understanding the abortion situation in Kenya, it is important to first know a few facts and statistics about the Kenyan population. Kenya's population on the most recent count is 41.6 million. This means the country has doubled its population in the last two decades. This is caused largely in part by a birth rate of about 36 births/1000 population (compared to the UK that's at 12 births/1000). The population growth rate is at 2.5% per year. This roughly translates to 1 million people being added to the population every year.

Continuing with the figures, recent studies show that more than 40% of births in Kenya are are unplanned. The figure rises to 47% among teenagers. Only about 39% of women use contraceptives and it's a third of these that rely on a modern method. Reports indicate that there are about 310,000 abortions every year in Kenya. 21,000 women are admitted each year due to abortion related complications from having unsafe abortions – usually done in backstreet clinics. 2,600 of these eventually die. Of the women admitted, 12% were older than 34, 40% were between 25 and 34 while 16% were teenagers.

What then can explain the reported 310,000 annual abortions in Kenya? It is safe to say that behind nearly every abortion in Kenya... is an unwanted pregnancy. Most experts agree that the high rate of abortion can be explained by ignorance of or lack of access to contraceptives. Around 85% of teenage girls engaging in sex do not use contraceptives. 70% of this same group reportedly engages in casual, unprotected sex. In a recent survey conducted in Kenyan schools, only a quarter of the female students knew that contraceptive pills were to be taken by females, not the males. An even less number knew to take the pills everyday, not just before sex. Other statistics show that it is only 28% of women aged 20 – 24 that are using contraceptives.

The adolescents cite stigma of childbirth outside of marriage, the inability to support a child financially and being forced to drop out of school as the main reasons they opt for abortion.

Women who are older often cite tough economic conditions as their reasons for an abortion. Some in the urban settings say it is more of a lifestyle choice than anything else because they would, for example, rather pursue a career than have a child. Increased westernization of the country has made traditionally large families to be frowned upon by many modern women in general. The average child per woman in Kenya in the 70s was eight, while today, the figure is just under four.

Even with the new constitution, abortion is still considered largely illegal in Kenya. It is estimated that as a result, about a fifth of all pregnancies in the countries are terminated through very illegal and risky means. As stated earlier, the figures show that about 21,000 women are admitted with abortion related complications annually.

A third of the women treated are usually in their second trimester. Abortions done after the first trimester tend to be more risky.

Only 16% of the delivery institutions can perform the vacuum aspiration procedure, which uses suction to empty the uterus and is the preferred method recommended by the WHO (World Health Organization).

Women in rural areas have much less access to treatment as compared to those in the urban settings. Also, it is private facilities that handle more than half of post abortion care cases, yet they charge three times more than the public sector facilities.

In the 90s, the Ministry of Health included contraceptive services in the post abortion care given in district hospitals after studies showed the effectiveness of family planning counseling and contraceptive use in preventing unsafe abortions.

Pro - life voices in Kenya have denounced the perceived encroachment of a foreign funded abortion culture in the lives of a deeply pro-life Kenyan people. It is widely believed that have been various international pro-abortion "family planning" agencies and their governments who have been putting pressure on Kenya to adopt pro-abortion legislation.

Marie Stopes International (MSI), founded by a British eugenicist of the same name, is known to provide abortion in at least 40 countries. The MSI openly states in its website that it provides legal and safe abortion services in Zambia. The Kenyan branch has clinics in various parts of the country.

The International Planned Parenthood Federation (IPPF) is a similar organization to MSI in that they are a world leader in providing services in the reproductive health sector. They list abortion related services as part of the work they do as an organization. Their African headquarters are in Nairobi, Kenya.

The United Nations Population Fund (UNFPA) is the largest intergovernmental organisation that aims to address the lack of access to family planning. The UNFPA supports countries in using population data for policies and programmes to reduce poverty and to ensure that every pregnancy is wanted, every birth is safe, every young person is free of HIV/AIDS, and every girl and woman is treated with dignity and respect. One of the biggest roles UNFPA has is funding organisations like the MSI. Without UNFPA funding, the MSI had to shut down two of its Kenyan clinics.

The biggest financier to the UNFPA is the U.S. government. The United States though has an important policy known as the Mexico City Policy, which tightens the restrictions of the Helms Amendment regarding US assistance for foreign family planning. The policy affected NGOs not only by denying any funding for abortion, but also by forbidding funding to organisations that either perform or promote abortion. It does make exceptions for abortion operated in response to incest, rape or life-threatening pregnancy. Since its initial implementation, the Mexico City Policy has been rescinded by Democrats and reintroduced by Republicans, making the pertinent issue of reproductive health in developing countries a political tug of war. The first thing Obama did when he got into power (after about just three days) was to rescind this policy, which had been enforced by the Bush administration.

Last year during the referendum campaigns, a report issued by the Inspector General for the U.S Agency for International Development (USAID) claimed that the Obama administration had spent over $23 million to influence voters to vote for a pro-abortion constitution. The U.S embassy in Kenya and the U.S Government later denied any direct involvements in the campaigns.

Article 26 in the new constitution was the bone of contention between the pro-life and pro-choice groups in the build up to last year's referendum.

Article 26 of the Constitution contains 4 clauses on the rights to life which state that:

International law has been introduced as a direct source of law in Kenya and to remove the requirement for Parliament to authorize treaties, thus exposing Kenya to activist interpretations of international law. This will affect the right to life as follows:

A more in depth look at the Abortion Law can be found here.

Some Suggestions on the Way Forward

No matter what side of the debate you fall on, each one of us in society is responsible for preserving health and life in general. The government is expected to:

The church can contribute by:

Schools can be expected to:

Individuals are also expected to take responsibility of their actions at all times. In the case of married women or even single ladies that are sexually active, increased caution should be observed when acquiring some of the family planning methods. They need to be aware of any side effects that may be involved. There should also be clear discussions between couples in order to agree on a particular number of children that they can both comfortably support in order to avoid cases of abortion.

Men should support their women by considering some of the family planning methods available for them so that it is not just the women who have to struggle with controlling the number of children they get.

A Synovate poll conducted during last year's referendum period showed that the citizens of Kenya are overwhelmingly pro-life. 69% were against legalization of abortion while only 9% were for it. 16% didn't think it mattered while 6% had no opinion. International influencers and other advocates of abortion are using the issue of maternal mortality and illegal abortions to argue for the full legalization of the procedure. However, proper education and awareness on contraceptives coupled with adequate health care support for pregnant women at whatever age would go a long way to curbing the vice, especially in the rural areas.