The Walk To The Ballot 1: Right To Vote 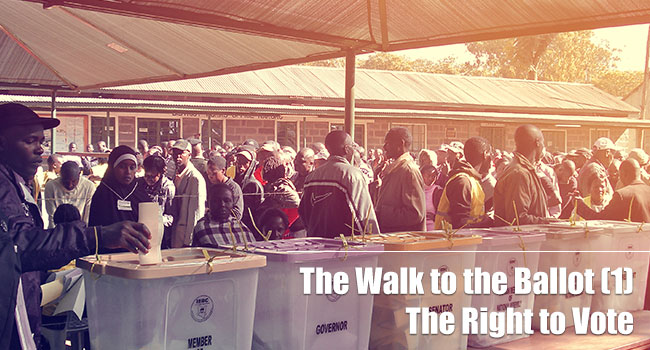 It is 2 o'clock in the morning, the cock is yet to crow but the crowd noises outside remind you of the date between your pinky finger and blue ink. Not even the children in the neighborhood are spared; in fact some will have to continue their sleep in the comfort of their mothers backs as she queues in front of a classroom marked with the first letter of her name. That day is fast approaching and so are the smartly dressed outspoken men and women pleading for your vote.

The National Electoral Body's ability to conduct elections has been put in doubt with voices demanding for a change of the referee before the game. However, away from the disbandment shenanigans, the Independent Electoral and Boundaries Commission (IEBC) recently concluded phase 1 of its mass listing voter registration. The exercise saw 1,428,056 new voters registering, falling short of the four million voters target by a massive 2,571,944 voters. As expected many people lashed out the exercise citng voter apathy while some of the political hopefuls wondered how that target number was arrived at in the first place since it wasn't achieved in the 2013 elections either. All in all, it remains to be seen whether there will be an improvement to the 14,352,533 registered voters from the last general elections and more importantly the 85.91% turn out.

Allow me to be your guide in this journey to the polling station, as I inform you of all there is to know as you make your way to choosing the next crop of leaders.

First things first; who is a voter? The constitution recognizes a voter as an adult citizen registered in the principal register of voters. To be eligible for registration as a voter, you must have attained the age of maturity (18 years), be in possession of a National Identity Card or Kenyan Passport at the time of registration, be of sound mind and lastly not have been convicted of an election offence during the preceding five years. Once registered, the Constitution gives you the political rights under article 38 which include the freedom to;

And the right to;

Ironically, enjoying the political rights is in itself a choice; you don't have to. You won't be arrested for not voting or registering but you will miss out on choosing good leaders and/or keeping the leaders in check.
Just as choices come with consequences, most (if not all) rights come with obligations and article 38 of the constitution of Kenya 2010 is no exception. A voter has the responsibility and obligation to:

However, the buck does not stop with you the voter; the State has the bigger role to play. It is the onus of the State to ensure that the political rights are preserved, respected, observed, promoted and fulfilled. To this end, the constitution provides general principles for the electoral system under article 81 as follows;

You can always reach me at This email address is being protected from spambots. You need JavaScript enabled to view it. for any questions or clarifications.