Mind of a Politician 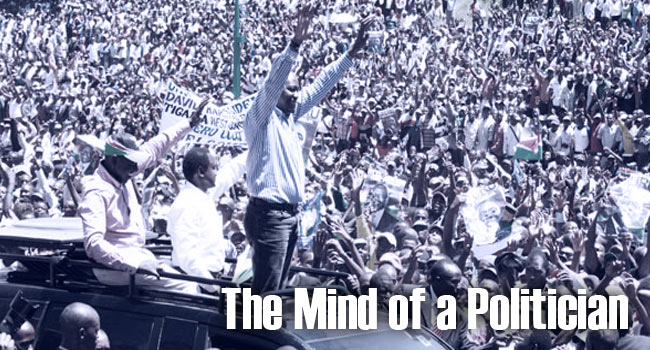 The minds of politicians (Kenya's) have always been the hardest things to fathom due to the rate at which they are changed. Some claim that 'politics is just a game' while others add that it is indeed a 'dirty game'. At the moment, Kenyans may not be able to understand some of the moves being made by their leaders, now that elections are around the corner.

If I may use the ICC cases as an example: before the naming of the 'Ocampo 6', those who were against the formation of any local tribunal insisted that the judicial system in Kenya was not capable of bringing the culprits to book due to corruption allegations. They even made up a slogan 'don't be vague, go to Hague' However, after the names were released to the public; the shock of having some leaders included in the list changed the song abruptly!

Suddenly, Kenya's judicial system was termed capable of handling all its cases without the interference of ICC. The government went ahead to organize a very expensive shuttle diplomacy that got the Vice President globe trotting to try and get the members of the Security Council to agree on the deferral of the Kenyan cases.

While all this was being done, the people most affected in the country by the post- election violence; (IDPs) were still suffering living in tents with limited food supplies and other necessities. Their vulnerability to different hazardous situations facing them has not to date, 'touched' the government to have them all resettled either back to their original land or new land bought for them. The focus shifted to helping the six people accused of perpetrating the violence.

Currently our members of Parliament are struggling to come to terms with the realization that they are required to pay taxes. There are some who did not waste time and went straight to the taxman to clear their dues. However, there are those who are proving to be adamant and insist that the constitution exempts them from taxation. They argue that during the campaigns for the new constitution they were advised to vote for it and they would not have to pay their tax until their term in parliament was over.

It's quite unfortunate to see how hard our politicians fight for their 'rights', but when they are supposed to do the same for members of their constituency, the enthusiasm disappears. Presidential elections are coming up in 2012 and many aspirants have made their intentions known to Kenyans. New political parties have already started forming, but the people are the same that Kenyans have had to endure working with before. Rivals have turned best friends and partners ready to 'peacefully' work together in steering this nation ahead, or so they say in their many speeches.

It is time we as Kenyans made up our minds to choose men and women of character, people who will bring positive change and will keep their promises to the end of their terms in leadership. We should purpose to select people who really have our best interests at heart and not to fulfill their selfish desires and interests.

For the youth in society, we are the targeted in all this keeping in mind that we are the majority in the country and easily influenced, especially in these hard economic times. Do not be easily swayed by the politicians with their 'sweet' words which only last as long as the campaign period runs, or even their money, which in most cases is money that may have been our taxes in the first place.

Be bold and stand for what is right so as to experience change and healing of the situations in our country.