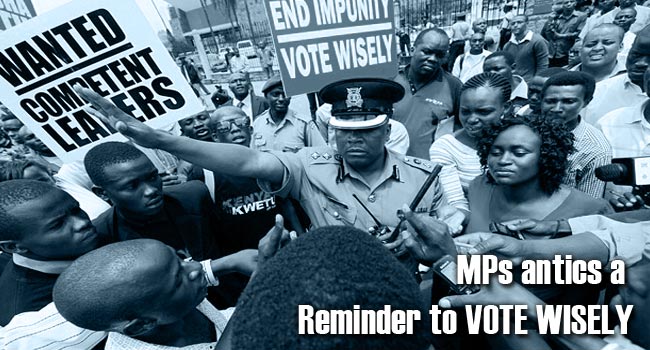 The President has declined to sign in the controversial Finance 2012 bill. He termed it as unconstitutional and unaffordable. What President Kibaki has done is laudable and he should be applauded. The Salaries and Remuneration Commission was established by the Constitution of Kenya in 2010 with a mandate to set and regularly review the remuneration and benefits of all State Officers and to advise both the national and county governments on the remuneration and benefits of all other public officers. Both the Salaries and Remuneration Commission and the Commission for the Implementation of the Constitution (CIC) had vowed to move to court to block the package in case the President assented to it.

The MPs had on Thursday night added a last minute amendment to the bill which would have given each of them somewhere close to KES 10,000,000 as soon as parliament disbanded in January 2013. Placard waving protesters on Tuesday stood outside parliament shouting 'mwizi' to every MP they saw drive by. After a weekend of ranting and raving on the social media, Kenyans on Twitter organised themselves to peacefully show their disapproval of the move by marching to parliament. The MPs could not have picked a worse time to give themselves the KES 2 Billion send off package. The government had just faced strikes in the public sector with both the teachers and the doctors agitating for better pay and working conditions. The Finance Minister, Njeru Githae, was categorical that there was no money left to implement the salary increases being demanded. After several negotiations however, the teachers and then the doctors got their way, but this would come at a cost. The government said that in order to foot the bill, it was considering halting some development projects that hadn't yet been initialised while at the same time increasing taxes. Kenyans are already some of the highest taxed people in the world.

So in the eyes of many, the Tenth Parliament has gotten itself the reputation of being some of the most greedy and selfish group of legislatures Kenya has had since independence. Despite constitutional safeguards, this year alone, the MPs have raided the public coffers at least twice. For instance, some time in April they sparked public outrage by awarding themselves about KES 1 Billion in gratuity payments. Last week, the elections (amendment) bill 2012 was passed to prevent the legislators from losing their seats by party hoping. They had also in the recent past watered down the Political Parties Act which would have locked out many of them for not having degrees. Many suspect that this group of MPs are apathetic because many of them fear that a more informed public would not vote them back in come the next elections. And this is the crux of the matter. Kenyans need to be more careful as to the kind of leaders they are voting in. Bad leaders mean bad policies, which will in turn mean a poor and retrogressive society.

The need to vote in leaders of integrity, who have the national interest at heart, cannot be overstated. Someone who was on the campaign trail during the recent by elections correctly noted that Kenyans need to shoulder some of the blame for the MPs antics. Any politician in Kenya will tell you that very few people would listen without you giving them hand-outs first. Men and women, both young and old will openly ask for 'something' before they listened to you. A significant chunk of the electorate isn't interested in talk of 'future prosperity of the nation' because their mind-set is on how they can benefit immediately. The mind of the typical electorate tells them that election time is the one chance they get to milk the politicians. The politicians know this, they are after all the ones who trained the people to think like that. So they give the hand-outs, knowing that after the elections, they will find a way to recover their money. And so the vicious cycle continues. This situation has to stop and it WILL stop if we as Kenyans took a stand and changed our thinking. We need to look beyond our stomachs and tribes. The future of our nation can be very bright. We have all the ingredients. Diversity in people and cultures, a relatively well educated work force, natural resources, a strategic location in the continent, relative peace, good weather and good will in the international community to name but a few things. With the right leaders, Kenya can be one of the greatest African countries ever. It starts with us. Good leaders mean good policies, which in turn will mean a great and progressive society.