We Can Have A Bright Future 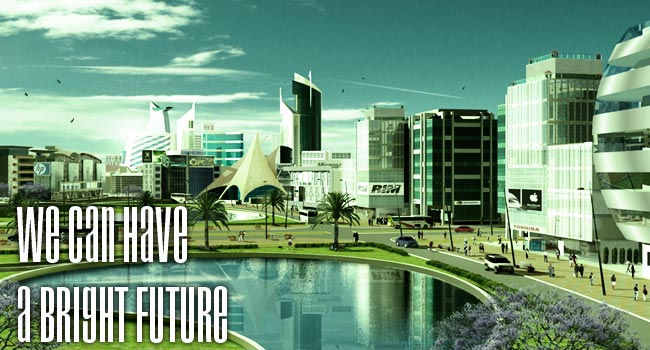 A recent report by Forbes magazine revealed that the richest man who ever lived, was an ancient African King. Mansa Musa I of Mali had a fortune of around $400 billion when adjusted for inflation. It is said that this 13th Century Emperor once passed by Cairo on his way to Mecca, and gave so much gold as a gift to the residents, that the price of the commodity fell, and the whole economy of the area was affected. Great empires are not a strange concept in Africa then. From the great Mali and Ghanaian West African Kingdoms to the Nubian and Ethiopian Kingdoms in the East, then down to the great Zimbabwean empire... Africa has always had a rich and powerful history.

One of the oldest and greatest nations on earth was African. The Egyptian empire was extremely powerful to the extent that it heavily influenced world culture and thinking in its time. This was especially true of the Ancient Greeks, from where the West got a lot of its thought and traditions. But a casual glance around the Continent today would leave our ancient ancestors in tears. Tales of war, hunger, disease, poverty and corruption are what we hear of Africa today. But it doesn't have to be this way. There is hope. If only we can see it, and believe enough to achieve it. Countries like Ghana and Rwanda are at the forefront of those who are seizing the opportunity to break away from the African stereo type. With the coming elections, Kenya has a massive opportunity to be one of the leading lights.

Kenya's economy is relatively strong... and this is independent of natural resources. The Nairobi stock exchange is one of the largest and best functioning in Africa. In 2008, the government launched the Vision 2030 economic plan, whose objective is to transform Kenya into a "middle income country providing a high quality life to all its citizens by the year 2030". In line with this, Kenya has already seen massive investment in infrastructure. Key to the Vision 2030 goals is an ambitious project, called LAPSSET, which is basically a Lamu Port, Lamu-Juba-Addis railway line, an Oil Refinery, a Lamu-Juba-Addis oil pipeline, airports, a Lamu-Juba-Addis highway, and resort cities. The LAPSSET project is expected to transform regional economies through increased trade, integration and interconnectivity. When complete, it will connect Kenya to Bangui in the Central African Republic and Douala all the way in Cameroon. Kenya has a relatively well educated work force, and a good internet penetration rate, which has made it an attractive investment point for many multi nationals. Recently, IBM announced it would place its first African research lab in Nairobi. The fact that it did so over Nigeria and Rwanda would strengthen Kenya's claim to being Africa's leader in Information and Communication Technology (ICT). Kenya is quickly getting a strong reputation in the ICT sector with great innovations such as M-Pesa. One of the major investments in the ICT/Business sector would have to be Konza City (Pictured Above). Konza City is a multi-billion, high tech science and technology park that will include a residential estate, hotels for accommodation, shopping malls, health facilities and schools. The futuristic city to be built 60kms south of Nairobi in Machakos County is set to be one of the most successful in Africa, competing economically and culturally with the best cities in the world. The Business Process Outsourcing (BPO) ventures there are expected to transform the country's GDP. It also represents a shift from Agriculture to a more service based economy. Kenya's energy sector is also set for a major transformation with huge investments in wind and geo thermal energy. Kenya has a $2.6 billion, 10 year plan to dig 566 wells at Olkaria, Menegai and Silali in the Rift Valley. The goal is to find enough steam to develop geo thermal power plants with capacities of up to 2000 MW by 2020 in a bid to ease dependency on hydroelectric power. The geo thermal potential in Kenya is estimated to be more than 10,000MW. Kenya also happens to be setting up Africa's largest wind farm near Lake Turkana, Northern Kenya. Turkana has one of the most consistent and predictable winds blowing anywhere in the world. But the thing in Turkana that is really about to change Kenya's fortunes would have to be the recent discovery of oil. In March, Kenya announced oil finds that may be larger than those recently found in Uganda. In June, Tullow Oil announced that the oil find was larger by a third of what they initially thought. The same company then announced Kenya's first significant gas find 70kms off the coast of Malindi.

Analysts have warned Kenya that good, strong policies will be crucial for the growth and sustainability of these industries, and this is the main point. Good leaders, means good policies and this in turn means a great country. Since independence, Kenya's great development plans have been held back by corruption and plunder of resources available to the government. The attitude that what belongs to the public can just be taken with impunity is recognized as one of the most serious impediments to development in Kenya, and Africa as a whole. Kenya has taken a step in the right direction by trying to create a new constitutional order that will make it harder for politicians and civil servants to continue looting with impunity. But more needs to be done to see this through. Recent events have shown that most of our politicians still don't have the nation's best interest at heart. The MPs have previously attempted to reverse good clauses in the constitution such as the demand that leaders be people of integrity, and that leaders need to have a certain level of education. Most of the current crop of MPs are a reminder of exactly the kind of leadership Kenyans should reject in the coming elections. For this to happen, very crucially, Kenyans attitude needs to start to change. A paradigm shift needs to happen in our mindsets. One wag recently summed it up like this 'Wacha Kenya iuzwe kila mtu apewe kipande chake ajichunge' – loosely translated to mean, 'let Kenya be sold and the loot divided so that every man can then sort himself out'. We need to be more nationalistic in our thinking. We need to be more futuristic in our thinking. We need to start thinking of Kenya as a great country with an immense potential to have a say in greater World matters. Then we need to choose leaders who align with this kind of thinking.

We cannot afford another 2007 scenario where violence threatened the stability of our nation. We cannot afford to have secession groups like the MRC to openly chant for a break up of our great nation. We cannot afford to let past injustices like irregular allocation of land and other resources go unaddressed, for these are what give rise to such groups in the first place. All this is possible. In 2002, Kenyans united against what they considered a tyrannical government. They voted out those they considered to be bad leaders and put in those they felt were best placed to take the country forward. The fresh feeling of optimism wafted through the air. Everyone was looking forward to a 'New Kenya'. In 2007, this dream was shattered and many became disillusioned as the country teetered towards politically instigated civil war. In 2013, we have another chance to revive the dream of '02. We can have that Kenya that hundreds of thousands dreamt of on that day in Uhuru Park as they watched President Kibaki being sworn in infront of that mammoth crowd. The future can be ours, but we need to vote wisely. We need to vote in visionaries. No one will give us our dream. We will have to take it. First step... is in that ballot box.