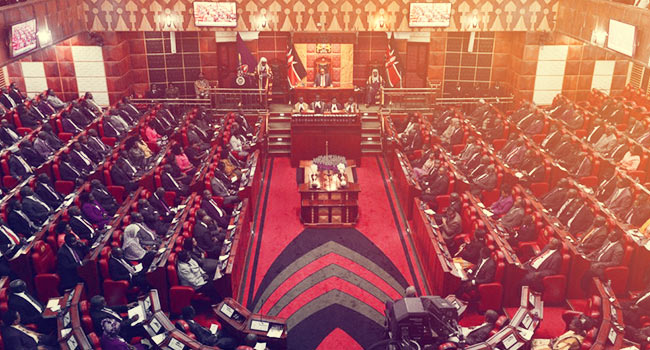 Despite the fact that 12th Parliament is about to begin business, a great Constitutional crisis looms over it. Articles 27(8) and 81(b) of the constitution provide that not more than two-thirds of the members of elective and appointative bodies shall be of the same gender. However, this has not been the reflection from the just concluded elections. We now have three women governors, three women senators and twenty-three women MPs elected by the people to represent and lead them for the next five years. The Parliament bears a great gender gap with at least 117 women needed to the National Assembly and 23 in the Senate. One of the ways to meet the one third rules is nominating women to fill that gender deficit.

The civil society has been vibrant in spearheading the development and implementation of the gender rule. Currently, various lobby groups have moved to court seeking orders to bar the swearing in of the 12th Parliament on the grounds that the gender rule is yet to be implemented. The lobbyists have sued the speakers of National Assembly and Senate as well as the Independent Electoral and Boundaries Commission and the Attorney-General. On their part, the Speakers of the National Assembly and the Senate have sought to have the case dismissed claiming grave consequences to public governance in the event that Parliamentary activities are curtailed.

Legal tussles in the implementation of the gender rule

Since the promulgation of the Constitution in 2010, lack of political will hampered the passage of a legislation that would breathe life to the gender principle.

Failure to the implementation of this rule led to yet another suit against Parliament by lobbyist groups. The High Court found that the Parliament had violated women’s right to equality, and freedom from discrimination. The court then directed Parliament to ensure that the legislation was enacted within 60 days. These have since lapsed without actualizing the legislation.

Barriers to participation of women leaders in political processes in Kenya

Various factors have hampered the participation of women aspiring far leadership positions in Kenya. First, Kenya is largely patriarchal and men are viewed as natural born leaders while women are consigned to servitude with their main duties being child rising and household chores. From young age, girls are taught to aspire to be good home makers as opposed to boys who are trained to take up leadership roles.

Secondly, lack of resources places many women aspirants at a disadvantage in running for political office. Running a political campaign in this day and age can be an expensive affair with expenses including nomination expenses, printing of fliers and hand bills, hiring of public address systems, mobile phones, agents’ fees, campaigners’ expenses, hospitality, transportation, accommodation and subsistence for candidate’s team.

In addition to the above, most political parties are dominated by men who monopolize the decision making structures. As a consequence, majority of the women aspirants at the party nominations are usually overshadowed by their male counterparts, thus, losing out on electoral positions.

Last but not least, there is a general lack of political will by bodies tasked with ensuring that the two-third gender principle is achieved. These include political parties, the parliament and electoral bodies.

Delivering On the Not More Than 2/3rd Same Gender Principle

At the moment, Kenya remains in contravention of the Constitution as well as other international instruments that promoting the gender equality to which we are party to. These include  Universal Declaration of Human Rights, The Beijing Declaration and Platform for Action, The African Union Protocol to the African Charter on Human and Peoples Rights on the Rights of Women in Africa (Maputo Protocol) and the Solemn Declaration on Gender Equality in Africa, has to uphold these principles and pull up their socks to attain equitable gender representation in Parliament.

More awareness ought to be done on the more than two third (2/3rd)  gender Constitutional principle. There is need for an effective mechanism as well as monitoring tool that will ensure the gender threshold is met. To this end public pressure and support for the women’s leadership from among the grassroots communities should be on the increase. At all levels, efforts to promote the recognition of women’s rights and equal participation in leadership should be recognized and encouraged. Henceforth, political party leaders should commit to ensuring that women within their respective political parties are not shortchanged in the nomination exercise and also commit to supporting the women who would be nominated to vie for “mainstream” seats, that is the constituency seats, senate and governor positions.