The President and The Judiciary in the County Commissioners Tussle 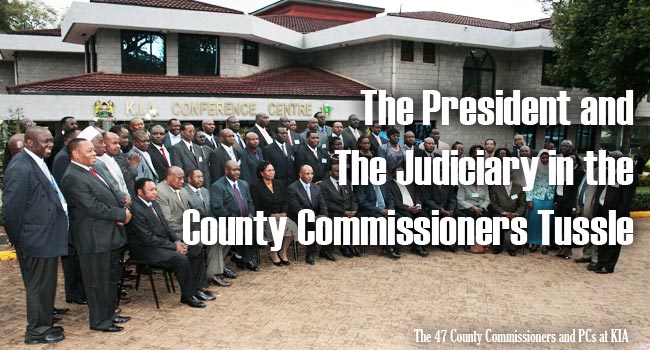 This move by the president was backed with Section 17 of the sixth schedule of the Constitution which states that:

The appointments were met with firm opposition from various groups lobbying against this and they were not hesitant to file petitions in the High Court challenging the constitutionality of this. It was said that the appointments undermined national values and principles of governance that are contained in Article 10(2) (b) of the Constitution. These include human dignity, equity, social justice, inclusiveness, equality, human rights, non-discrimination and protection of the marginalized. The petitioners also faulted the appointments due to the president's failure to observe gender balance; failure to consult with the prime minister whenever appointments to senior Government offices are made which is in accordance to the spirit of the National Accord and Reconciliation Act 2008; and failure to seek parliamentary approval on the same issue. This move also contravened article 27 that stresses on the equality of all persons and freedom from discrimination.

The High Court declared these appointments as unconstitutional and consequently null and void. Lady Justice Ngugi held that the President did not have any powers to appoint the Commissioners and that even if he did; he ought to have consulted the Prime Minister. She further stated that the president cannot make appointments to positions that are non existent. It was pre-empted that this appointments would have put County Commissioners in conflict with the governors.

Despite the Court's ruling, the commissioners are still in their new offices allegedly discharging their duties. It is as though the High Court's revocation of the appointments has been ignored. This has occasioned a tussle of supremacy between the president and the Judiciary as the commissioners function in the Ministry of State for Internal Security that is under the presidential docket. The Justice Minister has asked the President to officially nullify the appointment of the 47 officers urging the government to lead by example and show respect for the rule of law by respecting the institutions that have been put in place. The Attorney General has also advised against appealing the court's decision. The Law Society of Kenya (LSK) has said that it will apply for sanctions against the County commissioners still in office to be cited for contempt of court, reminding the Executive that nobody is above the law. The Internal Security and Provincial Administration Minister has ignored legal advice by the Attorney General and has now wants to commence an appeal against the High Court decision that declared County Commissioners illegal.

The question that now remains in this new constitutional dispensation is whether judicial sovereignty is still an existing principle.