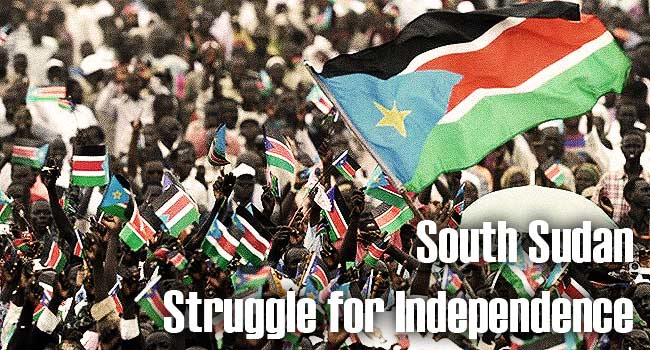 As Southern Sudan expects to be declared independent soon and about to be Africa's 53rd state, it faces, among the many problems it has, a major challenge of disarming more than 150,000 soldiers and easing them back to civilian life.
Southern Sudan Disarmament Demobilization and Reintegration Commission (DDR) chairman William Deng said the country wants to get rid of excess forces including the elderly, disabled and children. "These are soldiers seen not be in use after the war. We now need an organized, professional, controllable force".
The objective of the DDR process is to contribute to creating an enabling environment to human security and to support post-peace-agreement, social stabilization across Sudan, particularly the war affected areas.
Among those to be disarmed, demobilized and reintegrated back to the communities voluntarily are Sudanese People's Liberation Army and Sudan Armed Forces. According to UN figures, there are estimated 2.4 million guns in the hands of individuals who are not in standing army in southern Sudan with a population of about 10 million.
The challenge facing this programme is the fact that southern Sudan is vast, has poor terrain and a small economy. The number of soldiers to be transformed to civilian is also too big, therefore cannot be absorbed anywhere as the industries and private sector is not developed. The only reliance is on subsistence agriculture and oil, which may not handle the big number.
Sudan held a referendum in January 2011 on the independence of Southern Sudan which would have the new state called 'Republic of South Sudan'. The process is however facing problems since both sides are claiming ownership of Abyei area, which is rich in oil.

Making of the Tanzania constitution; The role of public participation

Thursday, 04 October 2012
Making of the Tanzania constitution; The role of public participation. The Constitution of a country is the most important legal document. It is the... Read More...
EALA seeks to transfer Hague Cases to Arusha

Monday, 11 June 2012
The East Africa Legislative Assembly recently passed a resolution to have the Ministers of the EALA institute proceedings that would have the trial... Read More...
Reviewing The Tanzanian Constitution

Wednesday, 27 June 2012
By Ken MbaabuTanzania is going through one of the most important phases in the history of any modern day democracy. This is especially important... Read More...
Churches Burnt In Tanzania