Insights into the Supreme Court Ruling 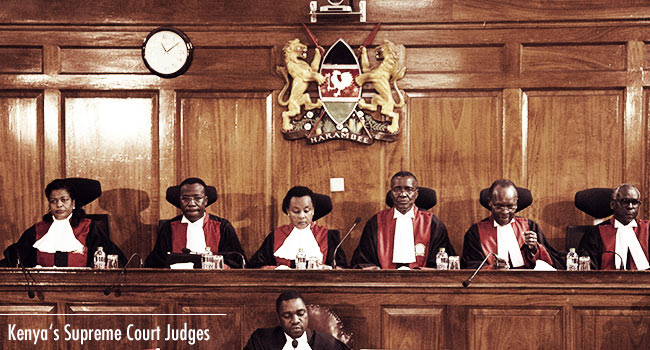 The Supreme Court of Kenya in a majority ruling with two dissenting opinions has invalidated the Presidential Election held on the 8th of August, 2017. The petition had been filed by the Presidential candidate for the opposition coalition NASA, Raila Odinga and his running mate Kalonzo Musyoka on the grounds that the election did not meet the constitutional test of integrity. The petitioners argued that there were a number of irregularities in the manner in which the electoral body conducted itself which had a negative effect on the outcome of the elections. They also made a case against the announced winner, Uhuru Kenyatta, as having influenced and manipulated both the agency and the voters by way of intimidation to ensure that the results were in his favour.

The IEBC on its part denied all allegations of acting contrary to the constitution and it's enabling law and was in order to announce Uhuru Kenyatta as having met the threshold for a duly elected President. His Excellency Uhuru also denied the allegations made against him but also made reference to some discrepancies in the IEBC procedures and tallies which he said did not have a significant effect on the results.

The Supreme Court was also addressed by other parties including the Attorney General, the Law Society of Kenya and two presidential candidates weighing in on the constitutional requirements, legal provisions and the jurisprudential value of other court rulings made by the lower courts.

In its wisdom, the court delivered a ruling in the morning hours of 1st September, 2017 where it declared among others:

The ruling is informed, in my opinion, on the fact that all parties alluded to the fact that there were a number of infractions such as Declaration Forms not signed, stamped or lacking security features. Despite the fact that the numbers were undisputed, it is to be noted that a similar situation occurred in 2013 where the Supreme Court ruled that the infractions did not have a significant effect on the results of the election. The fact that similar mistakes were made this time could be interpreted as the electoral body being given a green light to overlook the procedure as long as the numbers add up. It would be imperative for the interest both the Winner and loser that both side feel that they performed either way in a process that was free, fair and impartial.

The Judgment gives the IEBC a chance to redeem itself by addressing the technical issues in execution of its mandate. It allows the people especially from the ruling side to gain confidence in the integrity of the system thereby avoiding violence and disapproval. The message is pretty clear now for the commission that the end doesn't justify the means and in fact you stand to prejudice the deserved winner by condoning procedural flaws.

The effect of the ruling is that the Candidates get to undergo the test of the will of the people once more on a process devoid of any discrepancies. It would be noted that the country is in the middle of a secession debate while there have been a number of lives lost as a result of demonstrations against the election results. This Judgment maintains order for the nation and gives both sides a chance to appeal to the nation once more. There should be no cause for alarm because if the political divides are confident of their supremacy in terms of votes then the elections will prove that.