FAQs on the Nullification of the Kenya Presidential Election

Written by Melissa Lukulu on 02 September 2017. 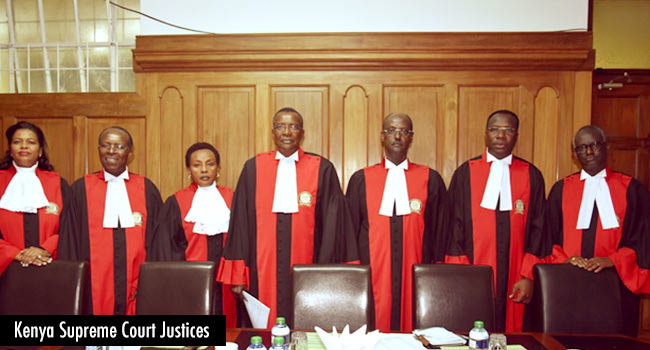 The decision, which was upheld by four judges and dissented by two, was a departure from the unanimous ruling given by the Supreme Court in 2013.

What is the Constitutional premise of Presidential Election Petitions?

Article 163 of the Constitution of Kenya gives Supreme Court of Kenya exclusive and original jurisdiction to hear and determine disputes relating to the elections of the office of the president. Article 40 gives any person contesting the validity of Presidential Elections the liberty to do so by filing a Petition at the Supreme Court of Kenya within seven days of the declaration of the president by IEBC. The Supreme Court should then give a determination within fourteen days.

Who were the parties to the 2017 Petition?

The Parties to the Petition filed at the Supreme Court on August 8th, 2017 were as follows:

What is the current composition of the Supreme Court of Kenya?

The following judges constitute the Supreme Court of Kenya:

What were the issues for determination?

Upon entertaining the Petition, the following emerged to be the pertinent issues requiring determination by the Judges:

What was the Supreme Court Verdict?

The Supreme Court of Kenya, which is duly constituted by seven Judges met the 14days Constitutional timeline and gave verdict on September 1st, 2017. Despite two dissenting opinions by Justices J.B Ojwang and N. S. Ndung’u, four judges gave the prevailing decision which is final and cannot be appealed against.

Having considered the issues raised in the cause of the proceedings, the following is the majority decision furnished by the Court:

What were the dissenting opinions?

The following grounds were advanced by the dissenting judges:

The Petition lacked the requisite and conclusive evidence to demonstrate irregularity that would justify the invalidation of the election results.

What was the role of thee Amicus Curiae briefs?

The office of the Attorney General (AG) is established under Article 156 of the Constitution of Kenya, 2010. Article 156(4) established the AG as the principal advisor to the Government and gives the AG the authority to represent the national government in court or in any other legal proceedings to which the national government is a party, other than criminal proceedings. Article 156(5) gives the AG the power, with the permission of the court, authority to appear as amicus curiae (a legal Latin term meaning a friend of the court) in any civil proceedings to which the Government is not a party. The Attorney General sought to advice the Supreme Court on various issues including the proper Constitutional and legal standard applicable to the conduct of presidential elections in Kenya as well as the effects of the use of technology in presidential election introduced by the Elections Laws. The case of Independent Electoral and Boundaries Commission vs. Maina Kiai & 5 Others was dismissed on the ground that it would amount to re-litigation.

On the other hand, the Law Society of Kenya sought to advise the Court on whether the presidential election was conducted in accordance with the Constitution and the electoral laws and if the total number of rejected votes should be considered in ascertaining whether any candidate met the constitutional threshold.

What was the ruling in the Electoral and Boundaries Commission vs. Maina Kiai & 5 Others case?

The Court of Appeal upheld the High Court decision that the presidential election results declared by the constituency returning officer are final in respect of the constituency, and can only be questioned by the election Court

What orders/reliefs/declarations were granted by the Supreme Court?

How different/similar is the 2017 Petition to the 2013 Petition?

Shortly after concluding general elections on March 4th , 2013, A total of three petitions challenging the election of the president were filed by different parties on different dates. All three were consolidated and heard together with the Court recommending that the third petition by Raila Amollo Odinga be the pilot/main petition. The Petition was the first of its kind under the current Constitutional regime.

In the consolidated Petition, the main issue / allegation raised was that the electoral process was so fundamentally flawed that it was impossible to ascertain whether the presidential results declared were lawful. It was further alleged that the manual tallying could not be relied on, and therefore the technical evidence of the IEBC needed to undergo scrutiny.

It is worth noting that the court rejected 900 pages which formed the Second Affidavit of Raila Odinga`s position on the basis that it amounted to new evidence, which is not admissible under the Kenyan Constitution. The petitioners' appeal for an audit of the ICT system of the IEBC was also declined, with the court citing that the process would be time consuming. The Court ruled that Uhuru Kenyatta and William Ruto had been validly elected and declared as President-Elect and Deputy President-Elect respectively and the presidential election had been conducted in a free, fair, transparent and credible manner in compliance with the constitution and the law. Further the court declared that the rejected votes ought not to have been included in calculating the final tallies in favour of each presidential candidate. Lastly, the Court stated that it had no jurisdiction to declare a recompilation of percentages by the Chairman of the IEBC.

While the opposition has welcomed the decision by the Supreme Court, they have expressed no confidence in IEBC conducting fresh polls. A petition has since been filed at the High Court to bar the IEBC officials from holding the repeat elections as directed by the Supreme Court, on the grounds that their integrity to hold credible elections has been put in disregarded. On its part, the IEBC, through its chairperson, has expressed that he intends to make internal changes to its personnel and processes as they prepare for the fresh presidential election in 60 days.

The decision by the Supreme Court is rendered final, thus no avenue of appeal. In accordance to Article 134 of the Constitution President Uhuru Kenyatta continues holding office until  when the newly elected President assumes office.

The question that lingers is whether the anticipated elections will be free and fair. Therefore, necessary measures that will ensure that the IEBC steers clear of repeating the errors witnessed in the concluded elections need to be put into action as we approach the sixty day deadline. There is need for expeditious adoption of drastic institutional reforms that will heighten the process of sound electoral management including purging itself of errant officers. In addition, IEBC should reach out to relevant stakeholders such as the United Nations, the civil society, government and even the opposition for assistance as it prepares for the forthcoming elections.

Numerous aspersions have been raised as to the integrity of international observers, majority of who were seen to unanimously applaud the conduct of the concluded general elections. There is therefore need to revisit the role played by observers and ensure that they proactively participate in enhancing democratic, transparent, free and fair elections, in tandem with the Constitutional threshold.

In conclusion, restraint, peace, patience and harmony need to be exercised throughout by Kenyans even as they express their attitude towards the just issued court ruling and as they await for yet another Presidential Election.